Police said they have exhausted all leads in the 2012 shooting death of a 40-year-old man and made a plea Friday for the public’s help with a $50,000 reward. 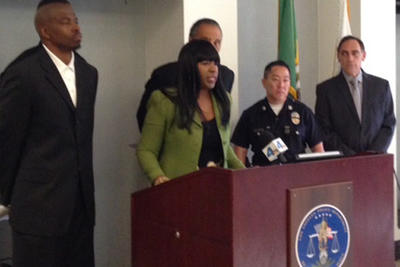 Paul T. James was walking in the 9600 block of South Hoover Street in Vermont Vista about 8:45 p.m. on Oct. 11, 2012, when he was approached by a black man wearing a gray hooded sweatshirt, said LAPD Det. Sal LaBarbera.

Without warning, the man pulled out a gun and shot James, who was taken to a hospital where he died.

The man was last seen leaving the area on foot, heading east on West Colden Avenue from South Hoover Street.

At a news conference Friday, James’ sister, Joyce O’Quinn, said the killer probably thought he got away with it.

“But he will not escape justice,” she said.

O’Quinn said James left behind four children, whose lives have been derailed in the wake of the killing.

She described James as a supportive father who tried to guide his children to be successful.

“Our entire family is hurting because of the senseless murder of Paul T,” she said.

“I think it’s important that we as a community lend our aid,” he said.

Anyone with information is asked to call the LAPD's Criminal Gang Homicide Division at (213) 485-1383.

To the James Family,
I am so so sorry for your loss. Never give up...
Never stop trying to find who took your loved one away. My brother was killed senselessly over a month ago. He has a article here as well. Though my journey has just began in mourning the loss of my brother. I hope one day I will get a call that the person has been caught. I also know that one day I might get a call that the killer himself might have been killed before justice was served because of the lifestyle they live. But I will never give up calling the detectives and inquiring about the case. Like the above comments said. The person had his heart in the right place, just a poor choice of words. Though my brother was not involved in gangs, I have been volunteering my time at a shelter for at risk youth. Because someone who was obviously troubled in some way resorted to living this lifestyle and if I could help them before they go down this road, before they cause pain that so many families feel, I know I did my brother justice in my own way. My prayers go out to you. Never give up, keep his memory alive. God bless

Anything is possible,
No I do not agree with you. Justice is just what is needed by some people. To see the case brought to justice, to see someone pay for what they have done is a time of healing. I think you advice was off by the words you used. I think your heart was in the right place but it was just a poor choice of words that got in the way. There is true justice we find the justice sometimes by finding the person that is guilty of the crime and sometimes we find justice by remembering the person as he/she was. None of us has the right to suggest to another that their way to feel better, to heal is wrong. You may or may not have found your way to heal and I would never tell you just get over it. However, that sounds exaclty like what you are telling this family. Take some money and go on vacation and just get over it. Wrong message, good heart.

@Anything impossible..I was touched by your heartfelt comnent. I will never understand what makes a living being wake up to only murder another.

The family cares about their loved one, how can you expect them to take the reward money go on vacation and just forget, that's not plausible, every family seeks justice, let the police do their job and the family stay on this coward who murdered their dad, son, brother, cousin etc, you celebrate their memory by making sure this heartless animal doesn't strike again, put the heat on them let them know your not going to rest until this heartless evil individual (s) is caught, then you take a vacation. No rest for the wicked, their out there plotting their next move.

My heart goes out to this family. Unfortunately, finding out who did this crime will open up another can of worms. A rivergate of deep emotions that will seem you are on a rollercoaster where mood swings will be the norm.

Our family too experience a random killing which landed on the LA Times homicide list. He was not on drugs, not in the drug game, did not gang bang. He was just a guy who went to college and worked yet stayed in the old neighborhood. His only crime was that he was too cheap to move to a better neighborhood because he had the funds. Ironically, he had planned to moved but changed his mind because he didn't want to pay more and he was sniffed out a month later. Now our family wonders why he didn't move. If only he moved he wouldn't have been on that block. He wouldn't have been shot. He wouldn't.... He wouldn't this or that.. In all ther other scenarios he lives.

In my experience, I have found out that there is no true justice rather the person is found because you build this hate against the killer and his entire family. Sometimes, you may play out a revenge plot in your mind because you want justice tru justice. In our case, the killer's family had the nerves to leave messages on the homicide article of my family members' name saying he/she is framed and how much they love the killer and f**k whoever is died no disrespect. Just disrspectful behavior and egging our family on.

Bottom line true justice is that your family member will be able to return but that is not the case. For me, I think of the moments he was alive not the few moments when he died. I try not to obsess how he died and who killed him and that person childhood. I consider it mental illness to take someone life and feel comfortable with the killing in the first place. Some killers convince themself its for the hood but its because they are mentally ill and can't control their illness.

I will not allow that murderer mental illness take over my life who already took one family member already plus put our family in moments of depression.

I beg of you James family, so it does not effect another generation is let the circumstances around Paul's death go and just celebrate his life. Celebrate Paul and not the killer and what he did that day. Continuing the search is celebrating the killer because he/she knows what they did and they get great satisfaction of getting away with it and you not knowing and the police being out smarted. Do not place anymore energy in that. When it is your time to find out it will manifest.

Take the reward money take all of your family on vacation or hold a BBQ in Paul's honor for this year and upcoming years. Refocus that energy. Bond in happiness not sadness over Paul's death. He seemed like a wonderful guy who enjoyed life and especially family.

Prayers to you and your family. Sending you love..