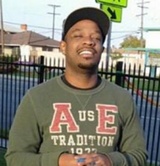 Aaron Joshua Holt, a 28-year-old black man, died Tuesday, Jan. 21, after he was shot on the 110 Freeway between the Sepulveda Boulevard and 223rd Street exits in West Carson, according to Los Angeles County authorities.

Holt, a single father of two, was a front-seat passenger in a car heading north on the 110 on Jan. 20, when someone began shooting into the car shortly after 7 p.m., said Los Angeles County Sheriff’s homicide Det. Dean Camarillo.

Investigators believe the shooter was in another vehicle, but “this is just preliminary information,” Camarillo said, “Nothing has been confirmed. It’s not like this is your typical crime scene.”

Holt was struck multiple times in the head and neck, according to records from the L.A. County coroner’s office.

The driver took Holt to a nearby hospital, where he was pronounced dead the following day at 3:53 p.m., according to coroner’s records.

Camarillo said he couldn't say whether the driver was injured until more more information about the shooting had been collected.

Investigators don’t know if Holt was targeted or a random victim, Camarillo said. The shooting may have involved gang members, he said, but there’s no evidence that Holt was involved in a gang.

There were no reports of erratic drivers or gunfire on the freeway that evening, Camarillo said. Anyone with information is asked to call the Sheriff’s Department Homicide Bureau at (323) 890-5500. Those wishing to remain anonymous should call Crime Stoppers at (800) 222-8477.

Do you have information to share about the life of Aaron Joshua Holt ? The Homicide Report needs your help. Please fill out this form or e-mail us at homicidereport@latimes.com.

Share a memory or thought about Aaron Joshua Holt

Wassup yc my lil bro i miss you man i still cant believe you gone you was my nigga good friend great father a real homie i love you bro i wish they find your killer cuz u didnt deserve to die like that you wasnt a bad person we did alot together and you took me to some places ill never forget you was a true friend and im still hurting cuz they way you left us wasnt right but bro when i make it imma let the whole world know who you are bro thats my word love you dawg REST IN PEACE WHYCEE.. BAR'TIS RNG❤

My homie Aaron didnt bother nobody ,he just was peacefull and trying to take care of his kids, if i ever find out whom did that I will get them for my homie and take them out . I pray God punish them for taking my bro.You in memory everyday Aaron rest well!

I miss you bro... I remember you kept asking when I coming back to the city. I should of came before it was too late.

I love you Aaron you didn't deserve this 😢😢😢