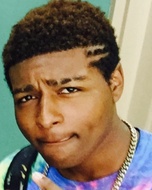 Adrian Dewayne Johnson, a 23-year-old black man, was shot and killed Friday, Sept. 27, in the 100 block of South Ash Avenue in Inglewood, according to Los Angeles County Medical Examiner-Coroner's records.

Shortly before 2 a.m., officers were called to the area regarding a shooting and found Johnson in the backyard of a home, suffering from gunshot wounds, according to a news release from the Inglewood Police Department.

Johnson was taken to a hospital where he was pronounced dead at 3:55 a.m., according to coroner's records.

Police did not release additional information about the shooting. The motive is unknown.

"I miss looking at those eyes and those dimples," she said. "He had beautiful dimples. He didn't even have to smile."

*This post has been updated with comments from Johnson's mother.

Do you have information to share about the life of Adrian Dewayne Johnson ? The Homicide Report needs your help. Please fill out this form or e-mail us at homicidereport@latimes.com.

Share a memory or thought about Adrian Dewayne Johnson

I remember how chubby you were as a baby with those deep dimples.

Definitely will miss you.
Tina

Did he live at this residence?

Can't imagine finding a dead body in my yard. Yikes

Adrian I love you so much baby . I will forever miss you . I enjoyed all the times we shared our water fights just the time I got with you was always so special to me. I pray that this will not be a cold case but a close case with justice for Adrian Johnson . Men I love you and so sorry this had to happen to you 💔 you didn't deserve this at all and I hate this is your story but believe me when I stay God got this there will be justice for Adrian Johnson 🙏🙌