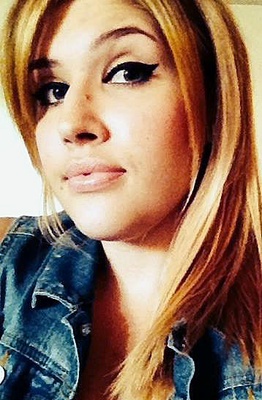 Los Angeles County Sheriff's Department deputies were called to the 8200 block of 70th Street in Long Beach about 1 a.m. after a resident reported that a man was pounding on the side door of her house, gasping for air and calling for help, said Lt. Eddie Hernandez.

Deputies arrived and found Jose Jesus Rivera-Olivarez, 35, on the woman’s porch. Rivera-Olivarez, a resident of Compton, was pronounced dead at the scene at 1:23 a.m., according to coroner’s records.

When investigators contacted Rivera-Olivarez's family, they learned he had last been seen in his car with his girlfriend, Kirkendall-Sosa, Hernandez said.

Investigators returned to 70th Street about 10 a.m. and found Kirkendall-Sosa in the passenger seat of Rivera-Olivarez’s car, which was parked about 50 yards from where his body was discovered, Hernandez said.

Deputies said Kirkendall-Sosa appeared to have been shot in the back of the head. She was pronounced dead at the scene at 10:13 a.m., according to coroner’s records.

Hernandez said medical examiners believe Rivera-Olivarez was hit on the head with a blunt object and then had a heart attack "as a result of running for his life from the perpetrator, who we believe was in the car."

Rivera-Olivarez died just outside the city limits of Long Beach, in the Sheriff's Department's jurisdiction.

Kirkendall-Sosa was found just inside the city borders, Hernandez said, but because the cases are related, the sheriff's Homicide Bureau has taken over both investigations.

Kirkendall-Sosa had two children, ages 2 and 4, according to Angel Ramos, the uncle of her youngest child. And during the autopsy, investigators discovered she was nine weeks pregnant, according to coroner's records.

Ramos said Kirkendall-Sosa grew up in foster care and had "some problems" he wouldn't describe that resulted in her own children being placed in foster homes.

She parted amicably with Ramos' brother, Ramos said, and had been staying with Ramos until a week and a half before she died.

"Regardless of the problems she had, she was a very, very good mom," Ramos said. "She always made sure she went to visit her kids. To her, they were her world, and I wish people would have just given her a chance. I was the one who took her to the programs so she could get her kids back, and she was changing herself, changing her way of being."

About a week and a half ago, Ramos said, Kirkendall-Sosa moved out of his house. He said it seemed that she was concerned about something, but she didn't say why she was leaving.

Do you have information to share about the life of Adrianna Aryanna Kirkendall-Sosa ? The Homicide Report needs your help. Please fill out this form or e-mail us at homicidereport@latimes.com.

Share a memory or thought about Adrianna Aryanna Kirkendall-Sosa

So sad I'll pray for you this story stays on my mind it hurts me to here about these story ...

It's gonna be a year and nothing was done I miss you Adrianna and my nephew is getting so big but I hate the fact that you ain't here to see him grow with you to my side rip baby girl :(

This story made me cry😢

Still think of you Adrianna I miss you :( till this day I think of you . . You still are in my prayers family forever

I feel really sad that you passed away I only met you once but I just think who ever done this to you to get caught and Roth in prison a young girl so beautiful may you rest in peace.

Any updates? Was this a triple murder, along with the baby of the same last name and the person just above her?

I miss u adrianna u will forever be my first love i miss ur beautiful smile not a day goes by that i dont think of u if only i wouldve brought. U to live with me like u wanted to :/ u wouldve been alive today i hope they catch the person that did this to u i hope they get the death sentence if not i hope the rot in hell! U didnt deserve to die like that...i will forever love u adrianna CHOCHOWOMAN+CHOCHOMAN always and forever

I miss you Adrianna so much this hurts so bad Rip baby girl i won't ever forget your smile and just you my fatty :(

My niece was a smart loving girl!!had a ruff life but not a bad person i mean come on who does this shot her in the head r u freaking serious. .ppl r insane now&days she had her whole life ahead of her n s she left a 3yr old daughter & a 11/2yr old baby boy behind.Im hurting &im very angry & i want answers!!!😡😭👑👼🙏🌸🎵Soul🎵when see you again🎵