Andy Le Vo, a 35-year-old Asian man, was shot and killed by Long Beach police Friday, Jan. 5, in the 2600 block of Lakewood Boulevard in Long Beach, according to Los Angeles County coroner’s records.

About 12:50 a.m., Long Beach police responded to a call from a Holiday Inn employee who said he was being held hostage by a gunman, according to a Long Beach Police Department news release.

At that point, two officers opened fire on Vo, said the release. He was taken to the hospital where he was pronounced dead at 1:55 a.m., according to coroner’s records.  The cause of death was listed as multiple gunshot wounds.

Vo's gun was recovered at the scene, the release said. 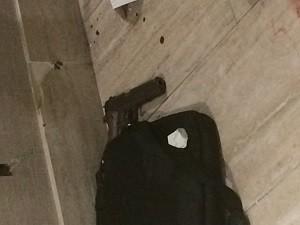 Investigators believe  the hotel was chosen at random, according to the release. Detectives did not believe Vo, of Irvine, was a guest of the hotel nor that he knew any guests or employees; authorities are trying to determine a motive.

Vo was the father of a son and daughter, according to his obituary.

Photo: The Long Beach Police Department released a photo of the handgun that Andy Vo allegedly used to hold people hostage at a hotel before he was shot by police officers.

Do you have information to share about the life of Andy Le Vo ? The Homicide Report needs your help. Please fill out this form or e-mail us at homicidereport@latimes.com.

Share a memory or thought about Andy Le Vo

Damn, I say next to this guy in 7th and 8th grade alot and we were pretty good friends
He has a couple kids and can't believe he'd do something like this....so random and why would he take someone hostage? I haven't talked to him in a few years but he had a big heart and I don't know. This and brad bufanda both dying within months of each other and they were both like my best Friends in jr high. Don't know why he took a hostage though, there's no money involved? Rip Vo I'll always love you buddy.i hope the best for his young kids, he was a good man deep down. Definitely had a conscience.damn Andy