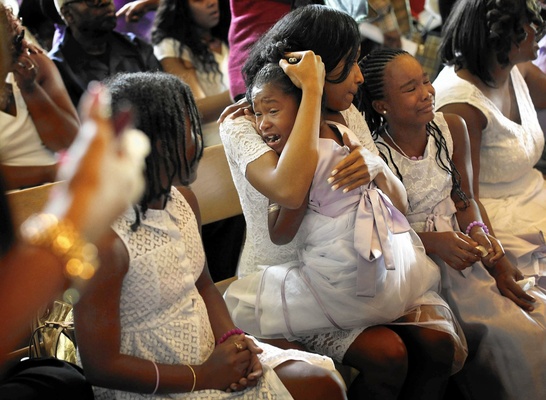 On Mother's Day, these mothers weren't celebrating. Instead, the women were standing in the streets of South L.A. carrying signs seeking donations for a "proper burial" for their 28-year-old sister.

Porche Charles had been shot to death a week earlier as she was celebrating her aunt's 70th birthday at a family gathering in Hyde Park.

The big boxing match between Floyd Mayweather Jr. and Manny Pacquiao blared on two televisions while people helped themselves to barbecued chicken and ribs, black beans and rice, tamales and drinks. People flooded the house and the yard. At about 11:30, shots rang out from outside the fence.

"I can't breathe," Charles said, stumbling to the side of the home. Her aunt looked for blood. There wasn't much. Someone got a pillow and slid it underneath Charles' head. She was taken to a hospital, where she was pronounced dead.

Charles grew up in a large family and had five sisters and three brothers. Though she was petite and thin, her personality — and her hugs — were big, family said.

In a corner of her home, Horta keeps a shrine to family members she has lost over the years. The turquoise shoes Charles wore that night are there.

"It's tearing me up that she died here on my birthday," Horta said.

Charles' family has more questions than answers. Detectives are in the same situation.

Police are trying to determine whether the shooting was random. Charles was not a gang member, said Los Angeles police Det. Connie Zych. She is pulling phone records and surveillance video to build her case.

Although the house had been full of people the night of the shooting, there were few witnesses. Zych is looking for more people to talk to.

"Everybody just heard shots," she said.

For family, the last few weeks have been filled with saying goodbye to Charles. There was a candlelight vigil, the fundraising in the streets, and days filled with planning the funeral.

On a recent afternoon, some of her sisters sat in a living room, trying to write the obituary that would summarize her life. One sister, Cresha Pree, said she was surprised at "how expensive it is to die." Her sister didn't have life insurance, and costs were piling up.

Vivian Lowe, who lives in Las Vegas but traveled to Los Angeles to plan her sister's funeral, said Charles "was my diary. I could tell her anything."

Rekita Charles, another sister, said the two were close in age. Soon after her sister died, she asked to see her one last time and was led to a small window at California Hospital.

"No one should have to see their loved ones like that," she said. "Not up laughing, walking around, but under a white sheet."

She pulled out a notebook to write the obituary. Inside was a brochure for a county program for families of victims of crime.

Cheshi Owens, a cousin, took the notebook and started writing. "We have the prayer, the praise," she said. "Oh, we need the song." Chatter interrupted the planning.

On Thursday, more than 100 people gathered to say goodbye to Charles at a mortuary in Lawndale. Friends and family wore purple, her favorite color. Her 8-year-old daughter sat in the front row.

Owens stood in front of a microphone and read the obituary. "Porche's life was spent on a quest for love and happiness," she said.

Arreonna Charles, 11, stood with her twin sister and addressed the killer.

"You didn't hurt my Auntie Porche — you hurt her family and friends."

An earlier version of this article gave an incorrect phone number for Det. Connie Zych. The correct number is (323) 786-5113.

Photo: Friends and family gathered Thursday for the funeral of Porche Charles, who was killed in a shooting May 3. Many mourners wore purple, her favorite color. Credit: Barbara Davidson / Los Angeles Times

I am so sorry for the loss of your family member. It's just so unfair that this is happening so much. We read these stories and we shake our heads not understanding that we all face the same possibility. We all have love ones and it just needs to stop. God bless you guys and I hope they catch that trash and lock them up forever. I want to say more but it makes me so angry so I will end here. You guys take care of yourself and I wish you the best.

Hello I am Porche Charles cousin and I was there that night that we had to experience this tragedy when the gun shots went off I was in the house and we all dropped to the floor I then ran outside to make sure everyone was ok I seen porche laying on the floor and I ran to her side and asked her to tell me who had done it but she wasn't responding and her pulse was very week my aunty shery has called the paramedics and she handed me the phone and I told them about her conditions and they told me to perform CPR so I did until the paramedics arrived... They rushed her to the operating room but her heart just couldn't sustain the surgery next thing you know they walked us to a window where they pulled the curtain up and there her body layed lifless it was the sadest thing I've ever experienced and I'm still dealing with this pain everyday.. I just want people to know that we fought for her life and did try to keep her breathing as long as possible I was the last person to kiss her while she gasp for air as I blew air into her mouth and tried to pump the blood through her heart as I gave her cheat compressions.... I have so much faith we will catch this individual because I'm not giving up the search until we do

I am deeply sorry for loss, because life is so very precious. To the family, I will keep you in my prayers.

wow.. reading this story brought tears running down my face.. I pray that the family get through the lost of their loved one.. prayers going up from my family to yours.. I'm sorry for your lost

Thank you all for your continuous support! Our family couldn't have done anything without the help from the public. Every cent counts. God bless!

what a tragedy..... sigh...
reading this seriously broke my heart.
If there was a link to help fund for the funeral , it would've been great. I don't have much to give but still, i would like to help. Condolence to her family... be strong!