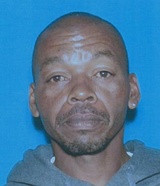 Anthony Alonzo Cudger, a 47-year-old black man, was shot and killed Saturday, July 25, at the intersection of South Hoover and West 88th streets in Vermont Knolls, according to Los Angeles County coroner’s records.

Cudger was sitting in a dark-colored Honda about 4 p.m. at a stop sign when a gunman in another car stopped alongside, got out of the car and opened fire, police said.

The gunman drove away in a light-colored SUV.  Police said they believe that more than one person was in the vehicle.

Cudger's vehicle collided into a light pole. He was pronounced dead at the scene at 4:15 p.m., according to coroner’s records.

Scott said the attack came after some “verbal sparring” at a gang member’s funeral earlier in the day, about a mile and a half away from the shooting scene.

Cudger’s killing was the only death out of several gang-related shooting incidents on Friday and Saturday, according to investigators.

The LAPD deployed extra patrols to try to find the shooters and calm tensions.

The shootings have put the community on edge, especially since rumors started flying on social media that a gang had promised 100 days of violence after a member was killed in early July. Using the hashtag #100days100nights, many people responded with concern or threats of retaliation.

Police are monitoring social media, hoping to prevent more violence, The Times reported.  South L.A. community intervention worker Robert Rubin said that the speed and anonymity of social media make it much easier to fan the flames of gang violence.

People can hurl dangerous insults and threats while hiding behind their computers and phones, he said.

“You know that saying, 'Sticks and stones will break my bones, but words will never hurt me?' ” Rubin said. “That is no longer true. Words are costing people their lives.”

Do you have information to share about the life of Anthony Alonzo Cudger ? The Homicide Report needs your help. Please fill out this form or e-mail us at homicidereport@latimes.com.

Share a memory or thought about Anthony Alonzo Cudger

I love you daddy and I miss you a lot ! Hate this had to happen to you . If I had one wish I swear you'll be sitting right next to me again smiling and laughing .

Well said Richard!!!!!! This aint "your daddy's south LA" Things have changed…. i challenge all the black and hispanic dads, sons, brothers and uncle to make a vow to change the culture…. Lets make a difference…. its not just black young men…. its our hispanic brothers as well….

I grew up in the area…. but feel a sense of loss when i read about all the death an destruction that plagues the community…. Wake up people… were destroying our future…. take away a mans abillity to reproduce and what do you have left!!!!! NOTHING!!!! Kids without fathers or real role models…. and the cycle just repeats itself!!!!!

O guess this answers my question posted after dellz funeral posting
"Can u preach forgiveness and peace
..go home, change clothes and seel vengeance?". The cycle will never end at this rate. Someone has to stand and say "no more'...and be joined by others in saying "no more". Blinded fools want to go out and rep their hood and avenge their OG ..YET always ignoring the message that most Geez who. Make it past 40 mostly preach,"it's not worth it....change before it's too late..think about your family..live...". I would consider that a much higher and profound show of respect than dialing up more hatred for a hood...Grow up, pahleeze!