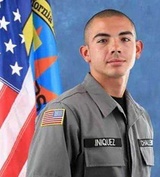 Anthony Oscar Iniguez, a 20-year-old Latino, died Tuesday, June 20, after he was shot near 252nd Street and Normandie Avenue in Harbor City, according to Los Angeles County coroner’s records.

Iniguez was riding his bicycle north on Normandie Avenue at 12:45 a.m. June 17 when he was shot once in the head, Los Angeles Police Det. Scott Coffee said.

He was taken to a hospital, where he died three days later, at 2:38 p.m. June 20, according to coroner’s records.

Detectives think Iniguez was on his way home and was riding his bike alone. Police still are trying to determine whether the shooter walked up to Iniguez or drove by and opened fire, Coffee said.

Iniguez was not a documented gang member, but he could have been shot by gang members in the area, Coffee said.

July 27, 11:30 a.m.: A previous version of this report misspelled the victim's last name based off incorrect information from the coroner's office.

Do you have information to share about the life of Anthony Oscar Iniguez ? The Homicide Report needs your help. Please fill out this form or e-mail us at homicidereport@latimes.com.

Share a memory or thought about Anthony Oscar Iniguez

my high school sweetheart 💙
my favorite memory was all we spent together but most of all spending movie nights with all our family & our babies laughing , eating popcorn and just telling each other how we loved spending time with family & dreaming of a future with our kids that now is broken away 😭

This Harbor Area has had several gang related homicides between the Harbor City Gangs and the East Side Torrance gang.

Damn I miss my my homie Anthony. Crazy how life gone change in the blink of a eye. I was literally when Anthony the day before, we were chillin laughing.. next day I get a phone call from my homie saying Anthony got shot? Couldn't believe it. Still can't. I miss u my boy
I'll see you up in heaven my boy. Rest Easy n rest in paradise Ant dawg. Forever loved & WIll always be missed
- Michael

Sad to hear a fellow cyclist ambushed by gangsters. Looks like a nice guy from a good family and leaves children behind. So tragic!

I am Anthony's grandfather, and our family has been grieving sense that day we received that phone call from my daughter ,Anthony's mother.
I grew up in the Lomita, Harbor city area. Went to all the local schools know peopke in most all the neighborhoods in the area. I have seen the southbay area change over the years but ehats going on here now is beyond anything I could have thought of as i was growing up in the neighborhood. And not in a good way .
I came back to town after receiving the news of Anthony's murder frist cecked on my childern and grandchildren then went to the neighborhood where it happened. I was disgusted to see how this area had changed just in the 4 years sense i moved away., so the night i got there i went out driving in my car late at night pn the street where it happened figuring that L.A.P.D. would have cars working the area and i would get pulled over but no, not a patrol unit around in that area. Now i have a l.e. background and know about buget cuts but this was not the only shooting in this area there had been one the week before at the other end of the block and another in the area a week or two before that. So not tohave extra patrols out at least running plates of cars laye at night seems very strange to me. But then i remember that this is the port area and not Hollywood or Venice beach, if it was going on there extra people would have been assigned in groves to catch the suspects.
So i know Anthony was in the wrong place at the wronge time but no one should be killed for any reason.
Now there is plenty of blame to go around on this including Anthony for noy being at home, but most of all i blame the person /persons who pulled the trigger anyone who knows who did it and noy saying anything, but most of all i blame governor brown, mayor garcitti,the city council, police chief beck for there lack of backbone and duty. And myself for not being able to be there and protect him. Anthony was a great kid and grandson and is missed dearly everyday. Anyone with any information PLEASE call the police detective Coffee at harbor police station and give him the information PLEASE.
THANK YOU for taking the time to read this May God Bless everyone who is involved in this type of crime,God Bless My family ,Anthony's family and you for taking the time to read this.

My little cousin was such a great daddy to his two little boys. We miss him dearly and sadly life will never be the same. He was a hard worker and family man. Please contact police if you have any information. Anthony was shot in front of a busy apartment building and several homes, someone saw something. Rest In Paradise baby boy