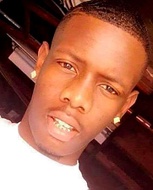 Arthur Theodore Givhan, a 19-year-old black man, was shot and killed Friday, Oct. 14, near the northeast corner of 107th Street and Western Avenue in the Gramercy Park area of South Los Angeles, according to Los Angeles County coroner’s records.

Givhan was walking with a  friend when a light-colored sedan traveling west on 107th Street stopped at the intersection, said Los Angeles County Sheriff’s Lt. Joe Mendoza. about 7:09 p.m.

Givhan and his friend argued with the people in the sedan, Mendoza said, and then walked away.

Givhan, a resident of Inglewood, was pronounced dead at the scene at 7:20 p.m. with a gunshot wound to the head, according to coroner’s records. His friend, who was shot in the lower torso, was taken to a nearby hospital and is expected to recover, Mendoza said.

Do you have information to share about the life of Arthur Theodore Givhan ? The Homicide Report needs your help. Please fill out this form or e-mail us at homicidereport@latimes.com.

Share a memory or thought about Arthur Theodore Givhan

This is not the correct story to my son's murder. No one waked up to him to shoot him. They shoot him from the car. Yall need to get the story correct before posting

To my son, my baby boy I miss you so much. From the day you was born I knew you was not promised to me for life. For you to be murdered at the same age as my brother is so much harder. I look at your pics and urn every day. The person that took your life I pray for him and trust me its the hardest thing ever to do at this time. My life may never be the same. Myself and your dad is bringing your son up in the best way possible. We all are having it hard missing you and you not around. I just ask God to give us strength every day. I Love and miss you so much......RIP my son, love ma as you would say!

My baby boy I know God only lend you to us for a lil while. Right now my heart is so heavy and my eyes are fill with tears. Nobody could have told me that you were going to leave me I would have held onto you a lil tighter. Baby I love you soooooo very much words can't explain how I feel . I miss you every single day it's not a day that goes by and I don't think about you. Miss them juicy lips kissing me baby I just miss you it not same without you. I don't think I will every be the same after losing you. You was my ride or die baby always looking out for me I miss that. Love you tell the wheels fall off RIP My Baby Boy.

Your death has shown me what I need to do. You will be missed, artie. I will do my best to change things and prevent parents from ever having to bury their child, due to this nonsense we have going on in black neighborhoods. Many things I do from here on out will be done in remembrance of you and many others, and I promise I will help out your mother and son every chance I get. I love you, and I wish I was around more; rest well.

This makes me very sad. I do not know this person and yet my eyes are full of tears. I feel like ive lost someone very very important and yet i do not know Arthur... I wish that communities that are subjected to be minorities would rise against violence. I wish that you could SEE how you play into your ethnic stereotypes. I know its hard to over come because you are who you hangout with, you are what you eat. You are the product of your environment, unless you can get away. I wish the best. But then again i am only 1 person. I cannot pursuade you all, nor can i save everyone and everything, though i wish i could

He is my Nephew,whom i love Dearly,he eas very talented he played Football he was a good dancer, he loved fashion and Gold Artie had a Rich Spirit. Artie i will Misd u,i will ser u in the afyer Life o love you R.I..P.Auntie Valerie...

I remembered Arthur T. Givhan from when he was just a couple years old when his family lived in my apartment complex in Los Angeles on Manhattan Pl. He was a cute little bow legged kid who always had a happy smile on his face and you could tell he was a happy and healthy child. I nicknamed him "Buddy" and every time he would see me or I saw him we would always say hello "Buddy" to each other. Sometimes him, my nephew and a couple other kids in the apartment complex would come to my house watch T.V. and drink Cappuccino :) May God bless his soul and keep a loving arm around his family. Farewell to my Little Buddy.. From his Big Buddy Michael E. Daniels