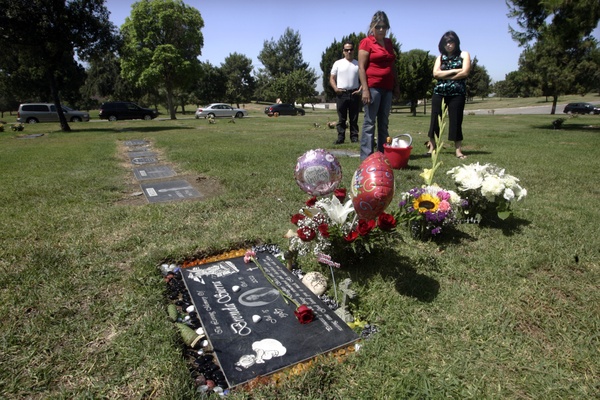 A fugitive suspected in the 2002 kidnapping and slaying of a 15-year-old girl on her way to school in Montebello was killed in Mexico, investigators announced Tuesday.

George Barraza, who authorities say fled to Mexico after the gang payback killing of Brenda Sierra, was on the U.S. Marshal Service’s “15 Most Wanted” list, according to the Los Angeles County Sheriff’s Department.

Investigators tracking his activity planned to extradite him to the United States for prosecution. But sheriff’s deputies learned recently that Barraza was killed in Sinaloa.

Three others suspected in Brenda’s slaying were arrested in 2015 after a years-long investigation and are awaiting trial. They all have pleaded not guilty.

A fifth suspect was killed in an unrelated homicide in 2003.

Investigators have said Brenda was targeted because her brother had testified as a witness to a gang shooting about 10 days before she disappeared Oct. 18, 2002.

That morning, Brenda left her East Los Angeles home to walk five blocks to a friend’s house. They had planned to ride to Schurr High School, but Brenda never showed up.

A missing person’s report was filed that night.

The next day, Brenda’s body was found facedown in an area of the San Bernardino National Forest known as the Valley of Enchantment.

Authorities have said she was taken to a “gang hangout,” where she was sexually assaulted and beaten to death with a blunt object. Her body then was dumped in the forest.

Investigators said they still are looking for witnesses who may have hesitated to come forward earlier because of Barraza’s rumored affiliation with gangs in East L.A. and drug cartels in Mexico.