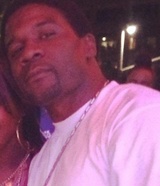 Calvin Williams, a 38-year-old black man, was shot and killed Saturday, May 10, in the 900 block of East 120th Street in Green Meadows, according to Los Angeles County coroner’s records.

Williams was standing in an alley shortly before 12:30 a.m. visiting with a friend when a black man walked up and shot at him multiple times, said Los Angeles Police Det. Sal LaBarbera.

Do you have information to share about the life of Calvin Williams ? The Homicide Report needs your help. Please fill out this form or e-mail us at homicidereport@latimes.com.

Prayers go to all family and friends, pray that the person who killed him, has never ending agony and feels remorse for this, and turns himself in. Prayers to all who are suffering, GOD Please all of you on this site and beyond. JDR

Any news on who did the killing?

Rip bro we love you
Your bro inlaw Derrick

Rest in peace to the lil homies father. Know you are in a better place . rest well champ!