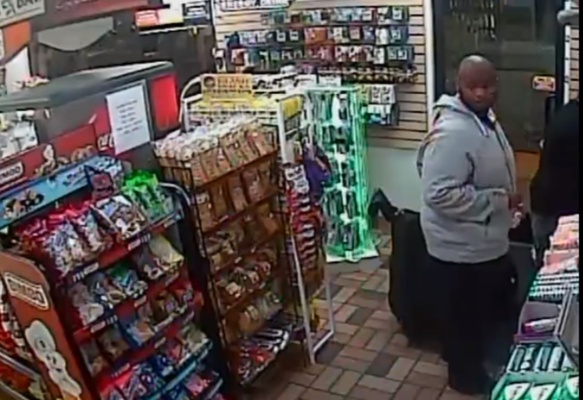 The Long Beach Police Department on Monday released surveillance footage of a person of interest in the shooting of a mother and child who were walking home from the grocery store.

The footage shows a man in his 20s or 30s entering a convenience store at the intersection of Locust Avenue and East 9th Street, the scene of the shooting, shortly after Carina Mancera, 26, and her 4-year-old daughter, Jennabel Anaya were gunned down on Aug. 6, according to a news release.

At the time, Mancera was walking home from the grocery store with her boyfriend, Luis Anaya, and daughter when a man approached and opened fire, according to Long Beach Police Sgt. Robert Woods.

Mancera died at the scene; Jennabel was pronounced dead later at a hospital, according to coroner’s records. Luis Anaya was unhurt.

Anaya told The Times he didn’t recognize the shooter, whose face was “all covered up.” The two briefly made eye contact before Anaya saw the gun.

The video also shows the person of interest, whom police want to interview, on a Metro Blue Line train at 5th Street and Long Beach Boulevard. Police said he got off at the San Pedro station in downtown Los Angeles.

Investigators believe the man, who was last seen on the train with luggage, may have left the state.

The man was described as black, roughly 6 feet tall, between 220 and 250 pounds with facial hair and probably in his 20s or 30s, Long Beach Police Chief Robert Luna said. In the convenience store video, he can be seen furiously wiping his forehead and neck with a white rag before buying a drink. He was wearing a gray hooded sweatshirt.

The Long Beach City Council and the county Board of Supervisors have offered separate rewards for information leading to an arrest in the shootings, totaling $40,000. But police leaders in Long Beach have bemoaned the lack of calls in the days after the killings.

Image: A person of interest is seen in a convenience store near the scene of a double slaying shortly after the shooting. Credit: Long Beach Police Department via YouTube

R.I.P. to the little girl and family. What's wrong with representing the BLM? Did i miss something? who said this little girl's life or anyone else's life didn't matter. Some people I see can't help but be racist. Smh. "Person of interest?" read before passing judgment!

No, James, what's funny is how quick people like you want to use something like this as a way to make some weak ass, anti BLM political statement. One, neither the police or YOU knows who committed this crime. Two, if he DID commit this crime, through what telepathy have you determined that he did it because he is a racist and 3, IF he did it and it can be proved, his ass will either wind up on death row or spend the rest of his life in JAIL. Contrast that to these cops running around shooting unarmed citizens who rarely EVER get convicted, and even a race baiter like YOU should get it-The problem is that these cops almost always get away with their crimes, while these Black folks you use to try and create a false narrative go to PRISON.

No one know for sure if this is the person that did it. If you read it says he is "a person of interest".

Funny how the BLM crowd goes crazy when a grown, black-man holding a loaded weapon gets killed by police, yet you don't hear a word when a 4 year-old latino girl is murdered by a racist grown black-man.

If this is the person who did it, Should be automatic hate crime charges as well.