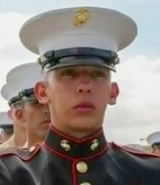 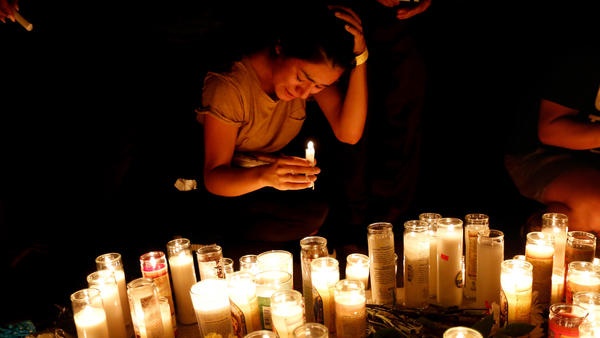 Carlos A. Segovia-Lopez, a 19-year-old Latino, died Monday, Sept. 19 after he was shot in the 2100 block of West 31st Street in Jefferson Park, according to Los Angeles County coroner’s records.

About 11:30 p.m. on Sept. 16, Segovia was found with a gunshot wound to his head in his black Dodge Charger, said Los Angeles Police Det. Matt Courtney.

Segovia, a Marine on weekend leave from Camp Pendleton, had just left his girlfriend’s house and was on his way to a family friend’s home for the night. It’s unknown whether someone walked up to his car or shot from another vehicle.

Segovia didn't have any connections to gangs or other illegal activity that would make him a target, they say.

Police are trying to determine whether Segovia might have witnessed a crime before he was shot.

"There's speculation on different things that may have happened," said Los Angeles Police Det. Matt Courtney. Courtney said Wednesday that there was not "a significant amount of people coming forward."

"We don't operate in a bubble; we don't solve murder cases by magic," Courtney said. "We need people to come forward and provide information and do the right thing."

Officials on Tuesday night announced a $50,000 reward for information leading to the killer as hundreds gathered to pay their respects near the shooting scene.

As mourners waited for Segovia's mother to arrive, people placed flowers and candles at the foot of a telephone pole. The smell of sage filled the air as a man wearing a green Marines T-shirt tacked an American flag to the pole.

When Sandra Lopez arrived, layers of people parted to let her through. She slowly walked to the front of the crowd and paused, staring at the candles with tears in her eyes before speaking in front of the TV cameras.

Lopez called her son a man with a passion to give. He worked with the homeless and with rescue dogs, and had committed to a life of service with the Marines.

Over the last few days, Lopez had to see her son, a born fighter, struggling for his life.

"My only boy," Lopez said at the vigil held Tuesday night in honor of her son. "My wonderful boy who was killed. I have no idea how I'm going to live without him."

Eric Marshall met Segovia through work with LA on Cloud 9, a group that helps the homeless and animals, and said he was the "epitome of the strong, silent type," one who had a penchant for helping others.

"This man was no ordinary person," he said.

Marshall said Segovia had a way with animals and called him the "dog whisperer."

"We are heartbroken over this tragedy," LA on Cloud 9 said. "We were fortunate to witness Carlos become a fine young man who graduated from the Marine camp earlier this year and started his service with the U.S. Marines."

Segovia, who was born in El Salvador, came to the U.S. with his mother. Both are U.S. citizens, Claudia Perez, a family friend, said.

The U.S. Marine Corps said Segovia's current assignment was at the student reconnaissance training company. He had earned the National Defense Service Medal and a certificate of commendation.

A statement from the Marine Corps said that his death weighed heavily on everyone's hearts.

"The overwhelming support and prayers we witnessed in support of this young man are a testament to the mighty son, friend and warrior that he was," the statement said."Although we grieve the loss of one of our own, we will continue to stand with and support Carlos' loved ones as they work through this tragedy. In a very short time, [Segovia] deeply impacted those who came to know him and his unselfish and honorable legacy will live on in our Corps. Once a Marine, always a Marine."

Lopez called for people in the community to speak up.

"He wanted to give his life to people," she said. "He doesn't deserve this."

Near the end of the vigil, a man played taps on a trumpet as men and women began to cry.

Share a memory or thought about Carlos Alfonso Segovia-Lopez

My sincerest condolences to his mother, family, friends and society as a whole because we all lost an upstanding citizen.

I feel so sad about what happened he attended and graduated hight school a Foshay LC (Learning Center) I hope his family 👪 and girlfriend are ok and can make it through this without anyone else getting hurt.

Poor Carlos, my heart is so saddened for such a fine young man being taken out in such a senseless act of violence.His Mom is really going to need love and comforting. I wish we could hold a fund raising event to commemorate Carlos and assure his Mom she is not alone.

Same here I heard the news On 1070 am radio. Our prayers go to him and his family. RIP Carlos I don't know you but my prayers go to you. I know your Mom is with lots of pain Dear Jesus please help his family so justice could be done.

I have been touched by the story of this young man
Such a gift to this world. One questions God at times like these
I cry with his mother ,Family and friends.
I have an eighteen year old son, who will be graduating high school next year. I hope and pray he grows to be a man like Carlos was
Giod bless his mother , Carlos would want her to be strong and not sad
Karen Gala

I saw this story on the news the other day, very sad & tragic, to serve overseas only to come back home & get killed. Hope they find whomever is responsible soon & that they get punished to the full extent of the law.