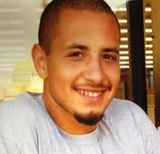 By Jerome Campbell and Jeanette Marantos

Carlos Alberto Vera, a 22-year-old Latino, was shot and killed Friday, June 10, in the 7500 block of Compton Avenue in Florence-Firestone, according to Los Angeles County coroner records.

A person described only as a Latino adult got out of a white car parked next to the curb, drew a handgun and began shooting at Vera as he rode by, Jauch said. The man fired multiple shots, then got back in the car and drove away heading south on Compton and then east on East 76th Street, until he was out of view.

Vera was taken to a hospital where he was pronounced dead at 4:41 p.m., according to coroner’s records.

On Saturday, more than 50 family and friends organized a car wash  at the scene to raise money for funeral costs. People held up signs while others used buckets and towels to clean any car that stopped.

Across the street, family members built a small white covering to protect candles from the day's drizzling rain.

"He was my baby brother, my only brother," his sister, Christian Vera, said.

Carlos and his toddler daughter lived with his sister and her husband two blocks from the shooting scene. During the car wash, her daughter played with Christian's 2-year-old daughter.

Christian Vera said she thought her brother was bicycling to visit a friend the day he died.

"He was so well known in the neighborhood. That's how so many people came out and wanted to help," she said. "It just doesn't add up. How does this happen to a guy like him?"

Investigators are trying to determine the motive and whether there’s a connection with two other fatal shootings that occurred in the neighborhood within the next nine hours, Jauch said.

“We’re looking at causal factors to see if there’s a gang nexus or any nexus between the three shootings,” Jauch said. “We won’t rule it out, but we haven’t confirmed it.”

Do you have information to share about the life of Carlos Alberto Vera ? The Homicide Report needs your help. Please fill out this form or e-mail us at homicidereport@latimes.com.

Share a memory or thought about Carlos Alberto Vera

I was just thinking about Fat Boy (Carlos), he was my son's little buddy...my son Paul would say that Carlos was his little brother. So the first time he came to my home he was so young...he was a short chubby kid with a head full of curly hair, but even at that age he had a heart of Gold....I don't know why God took you so young...but for sure, your are now an. ANGEL...MISS YOU, see you. One day in Heaven..

The go fund me link : https://gofundme.com/28ymydw
Thank you