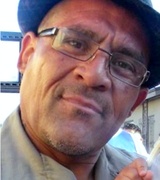 Carlos Martin Ortiz, a 44-year-old Latino, was shot and killed Tuesday, June 9, in the 400 block of Santa Fe Avenue in Compton, according to Los Angeles County coroner's records.

Los Angeles County Sheriff's Department deputies were called to the scene that evening regarding a gunshot victim, and they found Ortiz lying on the sidewalk, according to a department news release.

Ortiz had been riding his bike on Santa Fe Avenue when he was shot multiple times in the chest, according to coroner's records.

A dark-colored sedan reportedly drove up next to Ortiz, and someone in the car opened fire, according to the news release. The car then drove north on Santa Fe Avenue out of view.

Ortiz was pronounced dead at the scene at 6:50 p.m.

Share a memory or thought about Carlos Martin Ortiz

I miss you everyday daddy, you are forever in my heart! I wish I can get one more hug from you. I promise I'll keep making you proud papa. ❤️ Rest in gods hands

My Heart still aches with sadness, and Many tears flow.What it meant to loose, no o e will ever know.I hold you close to my Heart and there you will always be. What Keeps me going everyday are all the memories and love we both shared for eachother. Until we meet again ... I will forever Love you .My Love , My Man, And now our Angel.. Te amo Carlos Martin Ortiz. R.I.P

Damn pop-a-doc still don't seem real to me, I just pray you are with Andrew now watching over me my bros and lil sis and watch every step we make and protect us from the bad...we gotta long road ahead of us now with out you...ima hold it down for you dad know that #SonOfACrazyBoy

— Santiago martinez ; "and never 4get you and your word and what you stood for rolling."

We know what he stood for. Murder. Terror. Sociopath. Waste. Barbarity.

And the last moments of his life was understanding and feeling the pain he inflicted upon many others.

Still gang banging at 44 years old that's a shame, instead you should have used your time mentoring youngsters to stay away from the gang life, sad story to die at 44 when the average gang bangers life expectancy is 17 to 25, should have quit while you were ahead.

Carlos my deepest condolences go out to your family you were agreat friend it was a pleasure meeting you thank you for all those good memories you left us. my kids really miss you god bless you.. you are gone but never forgotten R.I.P Carlos

R.I.P to my Father in Law & Grandfather to my son, you will be missed. We love you.

You will forever be in my hart and all my best memory's Carlos crazy boy Ortiz .I still cant belive this is happen.You knew me bad and good seen me up and down on side by side I wouldn't be me if I didn't learn from all of my o.g. respected MALOS and you have mad respect and for me with you and still never gave up on me.Your name fit you bigtime you were really crazy.You were a real homeboy,you were more then just a good friend or big homie almost in a way like a dad and still you went out of your way always to call or come see me.thank you for looking out for me on all them late nights on 76st or at your pad on 75th well I was out there what ever it was or time it was u still had my back 100% everytime.thanks for always holding down 76 to the fullest us malos dont die we multiply you showed us true family love.there so much going on right now I can't understand what happen in your last moment's but I wish we could rewind that time and still have you here with us all tho I know ant shot forever but for now I will as long as im breathing keep our dopest memory's in my hart and never 4get you and your word and what you stood for rolling. Rest easy C NOTE AND SEE YOU WE I GET THERE.with all my love and respect BOY F13 Los Malos 76st #that76vida

How the heck does a guy who is a Father and Grandfather continue to be in a gang? In other words be a gangsta.

I'M gnna miss you so much, I love you so much...you will always be in my heart. Carlos it was a privilege knowing you Baby...

Our good friend Carlos M. Ortiz is truly going to be missed. He was a genuine down to earth guy but most of all he was a brother, uncle, son, friend, grandfather, and father that loved his family and friends. My deepest condolences and prayers to his family in this difficult time.