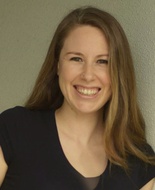 Shortly after 10 p.m., Melvin and her boyfriend were walking north on McCadden Place and were on their way to grab food when a black man walked up to the two and opened fire on the woman, police said.

The gunman then jumped into a black sedan and drove off, away from the popular tourist area.

Melvin was pronounced dead at the scene.

Investigators are still trying to determine why Melvin, 30, but not other people on the street at the time, was shot. Her boyfriend was unharmed.

There was no initial evidence suggesting the shooting was part of a botched robbery, LAPD Det. John Skaggs said. There was also no conversation between the couple and the gunman before he opened fire.

“We just don’t know,” Skaggs said. “On the one hand, she didn’t have any known enemies. On the other hand it looks like it was directed toward her … We’re looking at all angles.”

Melvin’s father called his daughter’s death “incredibly senseless.” Bernie Melvin said she had studied film at UC Santa Cruz and moved to Hollywood about four years ago to break into the entertainment industry. Like many young Angelenos, he said, Carrie Melvin worked several jobs – waitressing, bartending – while pursuing that dream.

“She was really kind of spreading her wings,” he said. “It’s an extreme loss to us. She had a lot to give and her life was cut short.”

Skaggs said that investigators believe the shooting was an isolated incident because the circumstances didn’t match any recent crimes.

Initial information suggests that the gunman acted alone. He was described as a male black in his mid-20s, about 6 feet tall, wearing dark clothes, including a dark hooded jacket.

Share a memory or thought about Carrie Jean Melvin

After reading more stories like the one above, I'm starting to believe that some of these gangbangers are nothing short of serial killers!

If this was a gang initiation we would see more cases like this. This is unusual. It seems more like someone was sending a message. Possibly to the "unnamed boyfriend"...perhaps he had an unpaid debt to someone. Poor girl.

Anyone looked at surveillance videos around the area this poor woman was gunned down? I'm also a bit nervous to go out and about...all these seemly random shootings...but, (hunch) perhaps she snubbed a suitor, or a woman was upset and jealous of her and took her life via her boyfriend...since she worked a few jobs...perhaps she said something to a manager and got a person fired? or someone was taking money from the till...I believe she was targeted...poor lady. R.I.P.

I do not think this was random. She worked at various bars. Perhaps it was drug related. We do not know anything about her personal interactions/dealings. Gangs tend to hit and run. This individual reportedly walked calmly to his car after the crime. I would guess that someone set her up. I am going to keep my feelers out since I live in Studio City. I drive through this area often.

How terrible. We have lost someone on her way to make contributions to our world. She had given so much to get here to begin her career. Her grandmother, Diana, called me to tell me this awful news. If we can't get rid of guns we need to invent shields to stop bullets. How can we stop violence in people. It is not impossible is it?

Gang initiation. I've heard about these things before. No motive = gang initiation. Esp since they drove off in a car. An accident always comes to light, can't be that.

I hope they catch this creep and give him the death penalty or life in prison without parole. There are surveillance cameras everywhere these days, so they had to have caught the car or a glimpse. It makes no sense why she was targeted.

I suspect the following possibilities:

- Racial hatred. Lately the media has depicted police, Whites, and the country in general as being anti-Black, which could inflame the minds of those who are mentally touched.

- Guy perhaps tried to ask her for her number at one point, and she said no, and he, having mental issues, couldn't just move on and decided to stalk her until the right time to take out his aggression on her

- Upset at their own life and at society and wanted to take it out on someone out of anger and jealousy. He sees a happy couple who are enjoying life and don't seem to have a care in the world, and decides to take it out on them because they're happy and he isn't.

Agreed completely with Phil. I work at a movie theater on Hollywood Boulevard, only two blocks from where this shooting took place. The leisure and tourist business around here is at serious risk if the area starts to get a reputation as being too risky to walk around in the evenings. Parking around here is difficult to find and expensive if you can find it, so tourists, locals and workers all tend to get around on foot and by public transportation. The shooting at Hollywood & Las Palmas earlier this year was bad enough, but at least it was internal gang warfare and they weren't interested in attacking uninvolved bystanders. This time the victim appears to have been a completely innocent person minding her own business, and for the sake of public confidence and the local economy, her assailant needs to be caught ASAP.

— Phil ;welcome to the Homicide Report. Where we see the stories that the media wont cover because they are too busy reporting on what the Kardashians are doing rather than hate crimes like this.

I agree with ☝the story of a black gunman with dark clothing. ...hmmm no other anything about this person. ...lets pray they dont just place another random "young black man" because all of a sudden someone remembered more or wants to talk now DONT GET ME WRONG MY LITTLE SISTER WAS A VICTIM OF A MASE MURDERER "RICHARD TABLER"GOOGLE HIM SO JUSTICE IS SOMETHING THAT WILL BE SERVED IF ITS MEANT TO BE BUT REMEMBER WHO ARE WE TO QUESTION THE MAN ABOVE....JUST HAVE FAITH AND BELIEF GOOD THINGS ARE SO REAL AND LORD REST HER SOUL AS SHE IS NOW YOUR ANGEL

What's the update on this? A woman is randomly murdered in a major U.S. Tourist destination. Why isn't there more reporting going on here? I live in this city and I'm uncomfortable walking around. Second murder of a random non gang affiliated individual. First one was in palms area, guy going out to get coffee shot and killed.

not buying the story of the line black gunman. The boyfriend, ex, or someone she knew set this up.