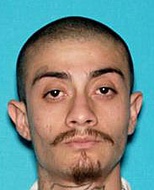 Cesar Alvarado Lemus, a 22-year-old Latino, died Monday, Oct. 31, after he was shot at the corner of Gerhart Avenue and Repetto Avenue in East Los Angeles, according to Los Angeles County coroner’s records.

Lemus was walking in the residential neighborhood with two other men about 7:30 p.m., in an area where many other people were out on the street because of Halloween, said Los Angeles County Sheriff’s Det. Theo Baljet.

As the men were walking south on Gerhart, a small, gray compact vehicle drove up behind them and someone inside began shooting, Baljet said.

Lemus was struck by gunfire and ran about two blocks, to the 500 block of Williamson Street, where he collapsed, Baljet said. He was taken to a nearby hospital where he was pronounced dead at 8:28 p.m., according to coroner’s records.

His two companions ran away and have not been found, Baljet said. However, investigators don’t think those men were struck by gunfire because the only blood trail led to Lemus, he said.

Investigators don’t have a description of the gunman or a motive for the shooting, Bajlet said. Lemus had gang-style tattoos, he said, but investigators don't recognize them so they don't now if Lemus was involved in a gang.

“There was no exchange of words, the car just drove up and began shooting,” Baljet said. “We don’t have a lot of witnesses, which is surprising because it was Halloween and people were out all over the place, but we’re hoping someone in the neighborhood saw the vehicle and will call us.”

Anyone with information is asked to call Baljet or Sgt. Troy Ewing at the Sheriff’s Department Homicide Bureau at (323) 890-5500. Those wishing to remain anonymous should call Crime Stoppers at (800) 222-8477.

Do you have information to share about the life of Cesar Alvarado Lemus ? The Homicide Report needs your help. Please fill out this form or e-mail us at homicidereport@latimes.com.

Share a memory or thought about Cesar Alvarado Lemus

Hey big bro yesterday was ur 3rd day and still miss u and ur kids are fine, we know ur in a better place, I hope to u see u soon

I wonder if its a Cold Case any updates?

Did they capture the people responsible for this case ?

carnal sly I can't believe this its devastating to find out like this I went looking for u but couldn't find u dam carnal I'm heartbrokin I need to know were ur buried I love u carnal rest in heaven :'(

Rest in peace babyboy forever in my heart . I miss you so much.