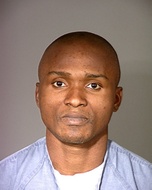 Charly "Africa" Leundeu Keunang, a 43-year-old black man, was shot and killed by police officers on Sunday, March 1, in the 500 block of San Pedro Street in the skid row section of downtown Los Angeles,  according to Los Angeles County coroner's reports.

Keunang was a homeless man who was shot outside the orange tent where he lived on skid row. He was known by the street names of "Africa" and sometimes "Cameroon," the name of his native country.

He gained international attention after a video of the fatal shooting was posted on Facebook, and it was discovered Keunang had been using a false identity stolen from a French citizen, Charly Saturmin Robinet.

Los Angeles Police officers approached Keunang around noon after receiving a 911 call reporting that he had been involved in some kind of robbery or assault,  Police Chief Charlie Beck told reporters.

Keunang allegedly refused to follow the officers’ commands, and instead, tried to fight them, investigators say. The officers used a Taser to try to subdue him, but Keunang continued to resist and fell to the ground, according to an LAPD news release.

Keunang was pronounced dead at the scene at 12:07 p.m., with multiple gunshot wounds, according to the coroner’s report.

The shooting is still under investigation, but some witnesses and family members are contesting the department’s official explanation of what happened. Beck told reporters there are videos from nearby security cameras and two of the officers' body cameras that are also being reviewed. The Facebook video has since been taken down and is no longer available for public viewing.

Keunang's family filed a $20-million claim against the city on April 30, saying the police “initiated” a struggle that ended in a “cop-created killing.”

The LAPD has identified the shooters as Sgt. Chand Syed, Officer Daniel Torres and training officer Francisco Martinez. Two of the officers were treated for minor injuries after the struggle, investigators said.

Friends on the street told The Times that "Africa" had frequent run-ins with the police, usually over taking down his tent during the day. People are allowed to camp on the streets between 9 p.m. and 6 a.m. but are supposed to remove their tents during the day, by court agreement.

According to the coroner's report, Keunang used the name Robinet to acquire a French passport to come to the United States in the late 1990s. He was close to finishing a college degree in mathematics and physics in Cameroon, family members say, but he wanted to move to Hollywood to become an actor.

In 2000, he was convicted under the name of Robinet for robbing a Wells Fargo Bank in Thousand Oaks and pistol whipping a bank teller for not opening the vault. His partners in the crime said Keunang wanted the money to pay off his debt to his acting studio, the Beverly Hills Playhouse.

While in prison, Keunang was treated in a psychiatric hospital for mental illness. His friends on skid row described him as a mostly kind, generous man who could sometimes turn volatile.

Syscom3, always taking jabs at these people you never knew, nor broke bread with. Who are you that you're so high and mighty with all the answers? Have some respect for the dead, your condescending preaching was old in 2007 when you first started rambling.

Dude was a nut on a suicide mission..

Andy, please tell the readers of this newspaper, how the police could have handled it differently?

Andy,
He did not COMPLY! He had one thing to do that day and he made the wrong choice. The actions of the officer are do to grabbing the officers gun. Charly if that is his name choose the outcome.

Syscom3 this was a fellow brother of mine they could of handled it differently. So you go down to skid row and save the day chump. Always hidden behind your words.

— Andy ; and what should they have done? Let him grab the weapon and then try to talk to him?

Rest in Peace Africa! They didn't have to do you like that.