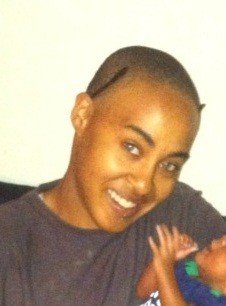 As she walked down Hollywood’s Walk of Fame with a coworker just after 8 p.m., an amusing cardboard sign caught her eye. She pulled out her cellphone to snap a picture of men displaying signs asking for money with four-letter insults and a smiley face.

Moments later, according to law enforcement sources, one of the men demanded that she pay $1 for the photos. When she refused, police said, two of the men pinned Calderon’s coworker against a wall and a third man jumped on top of her, knocking her to the pavement.

When she got up to run away, blood was gushing from a stab wound in her midsection. She was taken to a hospital, where she died at 11:42 p.m., said Ed Winter, spokesman for the coroner’s office.

Police said they were interviewing witnesses and had yet to determine a motive for the slaying. Police arrested Dustin Kinnear, 27, Jason Wolstone, 33, and Brian Widdows, 34, in connection with the stabbing, according to an L.A. Police Department news release.

Kinnear was charged June 20 with one count of murder with the personal use of a knife, according to the L.A. County district attorney's office.

Do you have information to share about the life of Christine Darlene Calderon ? The Homicide Report needs your help. Please fill out this form or e-mail us at homicidereport@latimes.com.

Share a memory or thought about Christine Darlene Calderon

Unfortunately this isn't entirely accurate. I can say I personally know Brian Widdows, he's a great person. Unfortunately Brian and Jason ended upin the wrong place and wrong time and got tied into a mess they weren't involved in.

My Chrissypooh. I miss you more and more every day. It still shocks me that your no longer a phone call away. Your life inspired me to be better and do greater. I have always and will always love you.
Talk to u later in my prayers until we meet again. My ChrissyPoo
Love,
Ja'Meisha

I miss u CHRIS !!! I think about u constantly I swear I do !!! I still can't believe your gone, WHY YOU is the question that I have WHY YOU!!! I love u BOO and ill always LOVE YOU my HEART HURT SO MUCH but its ok i know we gone see each other again!!! But until then i want u to know i think about u everyday like and it's killin me kuz i know we gon see each other again but it's takin too long for me I MISS YOU!!! REST EASY BABY GIRL RIP CHRISTINE DARLENE CALDERON

It is only going to get worse in ca because they are about to let out all of these prisoners because they feel they are overcrowded and not getting the medical they need. Bull...let them rot in there sick and all. They have destroyed so many lives so they should have no rights. They out the public at risk.

The arrest record of the stabber is sick! But the lack of jail time is the worse. He should have been incarcerated not out begging! All officials from the district att. to judges should be put on blast!

Has been arrested 46 times a KFI report said.
Over and over for the same crimes and given no more than 4mos. and probation w mandatory rehab. We are failing not only the public's safety but the mentally ill if not giving them the proper care.
Hopefully these killings will bring the the lack of mental health in America to a new light. By far not a simple solution I feel for anyone that has to deal w this. His own mother publicly said it was only a matter of time- since had been mentally ill from age 5. THE TIME IS NOW some do need to be institutionalized!

They are making it hard for the ones that can be helped. More and more people are avoiding eye contact saying and giving them nothing when they ask. You can't blame them- you don't know if crazy- type of crazy or criminal history. I tell my nephews to do the same. .. To add to the 1st comment; cops cant no longer dispose of abandoned shopping carts. AND soon we will pay for their lockers! Not being able to make people medicate when they lack reasoning should truly be revised.

A lot of major tragedies of the modern crazy r similar stories. Like the shooters in CO., CT., Santa Monica & this one, all mental illness/ lack of medication enforcement due to being of age & it being illegal to force of course.

This is a sad story. A young woman lost her life and now tax payers have to pay to keep these three guys in jail.

homeless dope piends use to get violent and kill the dealers back in the day every now and then in and around LA AREA, NOW not so much at all, homeless are considered harmless, but most are on drugs so go figure

I would like to extend my condolences. It's just a shame you can't even take picture now. The world is lying in the power of the wicked one Satan the devil. At (Psalms 37:10,11) Jehovah God is going to wipe them out, and "the meek will possess the earth." If you would like to know more then go to JW.ORG.

Christine was a really good and beautiful soul... she didn't deserve this and i miss her everyday.... even though its only been roughly a week.... they will never understand the great person they took away from this earth.... R.I.P. my love....

I live in Australia and there is plenty of homeless people here ,But nothing ever happens like this .thats bloody terrible poor woman

What a shame that this happened.
A woman who wanted a better tomorrow was killed by three losers who only lived for today.
I hope they rot in prison for the rest of their lives.

A big 'thank you' to the California State Assembly for passing the recent 'Homeless Bill of Rights', which permits crazy, homeless scum like this piece of garbage to live on public sidewalks for as long as they wish. Rest in Peace, Christine. Your life was just beginning, sweetheart, and you seem like a very sweet person. So sad that you died like this.