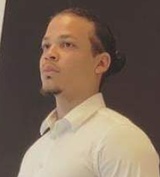 Christopher Damian Scorza, a 25-year-old black man, died Saturday, Feb. 29, after he was shot in the 1700 block of South Rimpau Boulevard in Mid-City, according to Los Angeles County Medical Examiner-Coroner's records.

On Feb. 28 at 11:40 p.m., officers from the Los Angeles Police Department's Wilshire Division responded to a call of a victim down in the parking lot of an apartment complex, said LAPD Det. Sean Kinchla.

Officers found Scorza and another man wounded. Both were taken to a hospital.

Police believe that one person walked up to Scorza and the man and shot them.  Kinchla did not release a suspect or vehicle description.

Share a memory or thought about Christopher Damian Scorza

Thats school yard crip and 18st hood.i lived there in all 90s