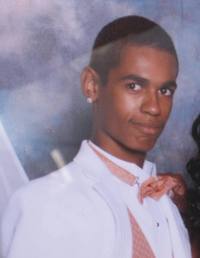 According to a neighbor,Taylor and a friend were leaning against a car,  text-messaging on their cellphones, when a vehicle drove up next to them. A person from inside the car said "what's up homie," then began shooting, hitting Taylor at least once in the head. The neighbor, Tanesha Burson, 32, said she ran out and saw Taylor's mother holding him. "She kept screaming, 'My son, my son.'"

Burson ran down the street to a fire station and told firefighters about the shooting. Then she returned and held Taylor's mother while firefighters treated Taylor.

Paramedics took Christopher Taylor to a local hospital, where he was pronounced dead. His friend, wounded in the leg, was also hospitalized and recovered. Burson said she visited Taylor's friend at the hospital, and that he told her the shooter was a black man.

Taylor was raised in Ohio by his father. He attended and graduated from high school in Ohio, then came to Los Angeles to live with his mother, according to Burson. She said Taylor had only been in Los Angeles for a year and had recently taken his girlfriend to her high school prom.

Taylor was employed at Tak's Garden Supplies at 12th Avenue and Jefferson Boulevard.  The store owner said Taylor had worked there for a few months. He said Taylor was a good kid and a good worker, but could not say anything further because he did not know him too well.  "Out of all people," said a co-worker at the store.

"He was just minding his own business," another neighbor said.

On Monday, drivers in the neighborhood would slow down to glance at the shrine.  "He didn't gang-bang, he was a good kid,"  Burson said.

Update: Christopher Taylor's mother, Angel Taylor, 37, said she never touched her son after he was shot. Angel said she was afraid to hurt her son by moving him. Instead, Angel said she started punching the rear window of her parked truck. Her fiance, Richard Chong, 48,  tried to keep Christopher awake by talking to him. Questioned whether any other details from Burson was incorrect, Angel Taylor said no. "That's how it happened," she said over the phone.

Dispatch: 'He could have made a difference'

Do you have information to share about the life of Christopher Taylor ? The Homicide Report needs your help. Please fill out this form or e-mail us at homicidereport@latimes.com.

C-tae I miss you not a day goes by that I don’t think about you. I regret telling you I’ll call you back 5 mins it was just 5 mins and I started getting messages and phone calls I miss your voice the long hours we spent on the phone the laughs and jokes your face that smile omg the smile the way you called me baby girl losing you tore me to pieces Chris I think about you everyday I can almost hear your voice I love you Chris and I miss you

Miss you my boy

Over ten years later and it still hurts like yesterday. Missing you 🌹

I miss and love you so very much, big cousin. I think of u all the time! ❤️❤️😍

I miss you so much! Your last words to me still ring in my head! I love you nephew!

I miss your gorgeous smile, handsom face. Your hugs&kisses your laughter,I MISS YOU BABY SOO MUCH,I LOVE YOU... not a week,day,hour,or minute goes by me that I don't cry or hurt for you. 'Yes Heaven is more Beatiful than here but I WISH YOU WERE WITH ME.LOVE YOU MY SON.
LOVE MOMMY.

I miss your gorgeous smile, handsom face. Your hugs&kisses your laughter,I MISS YOU BABY SOO MUCH,I LOVE YOU... not a week,day,hour,or minute goes by me that I don't cry or hurt for you. 'Yes Heaven is more Beatiful than here but I WISH YOU WERE WITH ME.LOVE YOU MY SON.
LOVE MOMMY.

My Nephew I love you and miss you....
Aunty Sherita