'We each have a role to play,' pastor says, marking six months since a young father's death 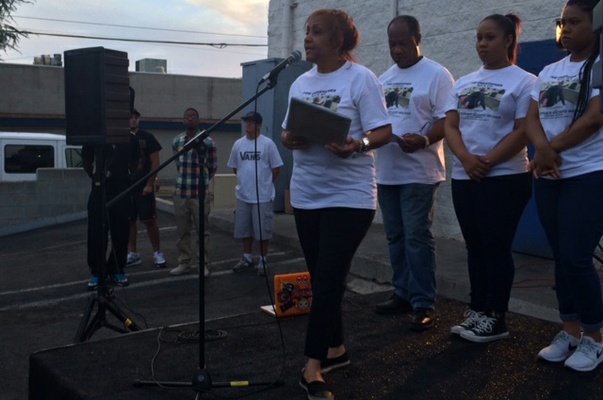 Six months ago, Hannah Petrie was on her way to a meeting when she encountered yellow tape and black and white police cars off Fair Oaks Boulevard in Altadena.

A friend told her that someone had been shot down the street, at Fair Oaks Burger. The crime took place six blocks from her home.

On Thursday evening, Petrie, a local pastor, and the family of the slain man, 26-year-old Christopher Walker, walked from a nearby church to the burger stand.

Petrie, a local pastor, spoke to the group of more than 100 about gang violence.

“Gang violence and tragedy isn’t just a black problem. It’s a community problem; it’s an American problem," she said on a stage set up in the restaurant’s parking lot. "And we each have a role to play in helping our young people reach their potential.”

On Oct. 30, about 4:30 p.m., Christopher Walker was waiting for a burger when a person approached him from behind and shot him. Walker, 26, was supposed to take his daughter home from school that day.

At the rally, Walker’s cousin, Johnathon Black, 25, read a letter Walker wrote five years ago about his fascination with the gang lifestyle and his descent into gangbanging.

The letter was tinged with regret about his choices, but also detailed how Walker had left California for Arizona, gotten a job, and was dealing with “grown-up problems,” like paying bills.

“I now have goals and dreams that I would have never imagined,” Walker wrote. Black choked up when his name was mentioned in the letter as a cool cousin. He paused before reading on.

The next to speak was Walker’s mother, Ursula. After her son’s death, images of the unrest in Ferguson, Mo., and shooting victim Michael Brown dominated the news. Ursula couldn’t help but feel anger. 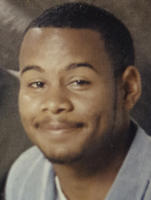 “If black lives matter," she asked, "why don’t we stop killing one another?”

Walker’s father, Richard, said he hears his wife crying in her sleep over the loss of her son. He said solutions won’t come from Washington, D.C., or from Sacramento, but rather, locally.

“What we know is big solutions start in small ways,” he said.

The Rev. Jean Burch, a local pastor, cautioned people from following a narrow narrative of gang violence. She said Christopher Walker’s story was different. He was not from a broken home and didn’t want for anything.

“There is no one story,” she told the crowd. Then she implored them to say: “Not one more.”

After the event, Richard Walker said his speech was harder to give than the eulogy at his son’s funeral, “because I had time to think.”

Richard Walker said that when his son was younger, he used to curl up on the floor beside him in his bedroom. He said he often thinks about that little boy who didn’t want to sleep too far from his father.

He paused. The violence "has to stop,” he said.

Photos: (top) Ursula Walker speaks to a crowd about her son's death and the effect gangs had on the 26-year-old. The rally was at Fair Oaks Burger in Altadena, where Christopher Walker was killed in October 2014. Her husband and daughters stand behind her. Credit: Nicole Santa Cruz / Los Angeles Times. (bottom) Christopher Walker is shown at age 19 in a family photo.

FOR THE RECORD: In a previous version of this post, the caption misidentified the month Walker was killed as November 2014. It was October 2014.

Ursula, Your family is in my prayers. You and your husband are such kind people it just breaks my heart the way life has unfolded for your family recently. I just want to hug you. I’m so sorry, so sorry for your loss. I worked with you 11 years ago with Kuma B when you all 1st moved in to your current office. What a kind spirit you are and were almost motherly to Kuma and I!
I believe love is the only treasure we take with us when we pass over, its eternal and always in the present tense. Just as still you are loving him, he is loving you, right this very now. That’s a treasure no one can take from us and is forever. I’m sure He is just as I am, so proud of you to have spoken at that rally to contribute in making a difference and sounding your voice and experience for the greater good of our community.
God bless you and all your family! Hugs!!!!!

As we are about to celebrate Mother's Day, I trust that a new awareness to the gravity of negative influences on today's youngsters will come to light. I am thankful for my two daughters—for although I received a Mother's Day Card from Christopher last year, he will not be here this time to acknowledge my special day. To young mothers everywhere, I say, protect your children by helping them maintain their innocence—for gangland is a one-way, dead-end street with no positive goals or benefits. There are no plans for education—and your children will get no encouragement for longevity.