Community to march against violence Saturday

Hundreds of people are expected to take to the deadliest streets in Los Angeles County on Saturday morning for a peace march and resource fair. 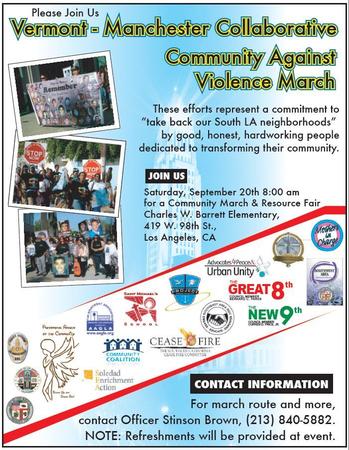 The event is an effort by a group called the Vermont-Manchester Collaborative, a collective of law enforcement officers from the LAPD and the Sheriff’s Department, as well as religious, community, gang intervention and nonprofit groups. The group started after a January Los Angeles Times article about the deadliest area in the county and highlighted the area of South Vermont Avenue, sometimes called “death alley.”

The group aims to improve the quality of life in the surrounding area including West Florence Avenue on the north, West 120th Street on the south, South Van Ness Avenue on the west and the 110 Freeway on the east, said LAPD Capt. Peter Whittingham, who oversees the South Bureau’s homicide division.

He hopes the march will send multiple messages.

“One, we are trying to get the entire community to come out and raise their voices,” he said.

In addition, he said, he wants gang members and politicians alike to take note.

“If you look at what happened in Ferguson, those people shouted and the government came running,” he said.

The area, he said, is in need of resources.

“No wonder it is the most violent,” he said.

As the Vermont-Manchester group prepared for the march at a meeting Wednesday, Whittingham told community members, nonprofit workers and gang interventionists to remember the message to the community.

The event will begin at 8 a.m. at Charles W. Barrett Elementary School at 419 W. 98th St. Refreshments and food will be available.

Before and after the march, officials are expected to address the crowd at the school, and a resource fair will be held.

The fair will include more than 25 vendors with information on array of services, including jobs, youth programs, library information and grief counseling.

Hope all the gang bangers are sleeping.