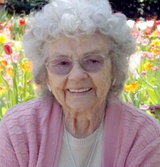 The county Fire Department was called about noon when a passerby saw smoke coming from the house, Jauch said.

Firefighters found Barnes in the living room with blunt force trauma to her head and chest, Jauch said.

The living room was on fire, Jauch said. Paramedics tried to revive Barnes, but she was pronounced dead at the scene at 12:23 p.m., according to coroner’s records.

A short time later, firefighters found Kenneth Barnes’s body in the bathroom. He was pronounced dead at the scene at 12:44 p.m., but his cause of death is still under investigation, according to coroner’s records.

Investigators found a wooden mallet near Constance Barnes’ body, which they believe was used to hit her, Jauch said.

Her son is so far the only suspect in her death. “The fire was intentionally set,” Jauch said, “but we don’t know the motive and we don’t know if his death is a suicide or if he died by other means.”

Do you have information to share about the life of Constance Barnes ? The Homicide Report needs your help. Please fill out this form or e-mail us at homicidereport@latimes.com.

I didn't know Connie, but I want to thank her for raising the two beautiful huskies that I adopted. Her son Kenneth left the huskies in his truck for the police to find. They are the sweetest dogs and they have been such a bright light in my life since adopting them. The boy is so funny and makes me laugh everyday. The girl husky is so sweet and I absolutely adore her. Thank you Connie for loving them for so many years. I promise to do the same.

Constance (Connie) Barnes was my Great Aunt and she and her husband Cyril used to come visit my Nana and Grandad in England every year when I was a child. She was such a kind and sweet person and we used to love their visits. She would bring pictures of their pet huskies for me because she knew I loved dogs and their suitcase would be stuffed with gifts and sweets for my brothers and I. We have albums full of pictures of the trips they took with my grandparents and they would call each other regularly to keep in touch despite the distance. Although it has been many years since she was able to make the journey to visit I have many fond memories of Auntie Connie. She will be greatly missed. Rest in peace Connie xx