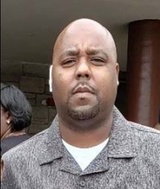 About 11:30 p.m., Pickett and another man were outside a home in the area when they were shot, according to the Los Angeles County Sheriff’s Department.

The shooter's vehicle, identified as a four-door sedan, fled east on West 94th Street, authorities said. The other man was injured and is expected to survive.

Pickett was pronounced dead at the scene at 11:29 p.m., according to coroner’s records.

Los Angeles County Supervisors are offering a $10,000 reward for information that helps find the shooter.

Share a memory or thought about Cory Devaughn Pickett

He was a kind soul. I visited the Pickett home the same day he was shot. Approximately, 6pm that evening, when I dropped by Corey was in good spirits. We had a brief conversation about my 21 year old son. Just like the man he was, Corey ask me to have him call him, because he thought maybe he could help him with a problem. That’s what he was about. Helping the youth in his community and anyone who would listen to his advice. He was a family man who didn’t deserve to die this way! Please find his killer/s.