Counselor shot in Vermont Knolls 'should have never been a target' 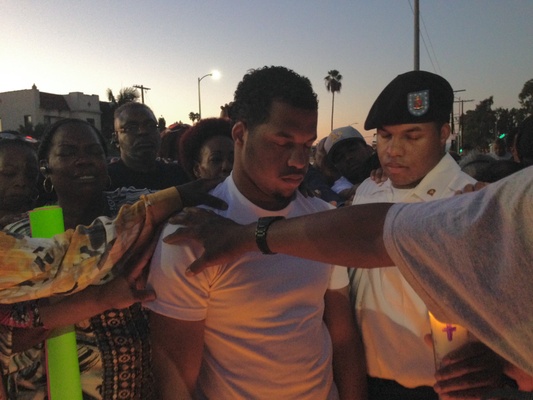 A group of three men hugged each other as they marched toward the spot Todd James Britt was fatally shot.

The men had formed a deep bond with the 51-year-old, who had supported them through difficulty.

On Sept. 16 about 6 p.m. Britt was walking his dog in the 7900 block of South Normandie Avenue in Vermont Knolls when he was approached by a man who shot him.

Britt was taken to a hospital, where he was pronounced dead. He was the eighth person to be killed in Vermont Knolls this year, according to the Times Homicide Report database.

Last year, 12 people were killed in the area. Detectives do not have a motive and have not found any suspects.

On Sunday night, the men walked east on West 80th Street with others who had personal memories of Britt. Yet, these men claimed to know him best. The trio swapped tales about their fallen friend -- each one claiming that they had a slightly deeper connection.

Lee Ingram said they had a close relationship as fellow veterans. But Pablo Nieves had a special place in his heart for Britt after he stood in his wedding. Robert Alford was the godfather of his twin sons and recounted many deep conversations.

“Britt just had a way of making you feel like you were the only one in the room,” said Nieves. “You could tell that man anything and he would be there for you. I can’t say there are many in my life like him.”

The night began with impassioned pleas and sentimental elegies but the crowd was filled with the frustration of seeing violent killings continue in their area.

Neighbors walked out to their front lawns and shook their heads as mourners threw up their hands. Then Gerald Thompson, a friend who planned the vigil, said they were standing where another man had been shot the day after Britt was killed. Britt was shot on the next block.

“I’m tired of attending yet another vigil,” said Kathy Thomas, a resident in the area. “He was a good man who should have never been a target. But that’s what we find ourselves always saying.”

Jae Irvin played with her hair while listening to the speeches from activists and pastors. She found Britt lying in his blood on the night of the shooting.

“I was standing over him and just kept thinking, he was an older man,” said Irvin, 44. “Why would someone come after him?”

Britt worked as an addiction counselor at the West Los Angeles VA campus after overcoming his own demons. In the 1980s, Britt developed a cocaine addiction that lasted about 10 years until he joined an addiction anonymous group.

“There are many more who would have been built up by him,” said Bruce Mays, a friend who attended the support group. “There’s not a lot of men lining up to take his place either so that killer really crippled this neighborhood.”

The rally of mourners filled the sidewalk when they reached the place Britt was slain. They placed candles at the site of the killing and prayed for Britt’s 21-year-old twin sons, Taylor and Terrell.

The two young men scanned the faces in the crowd but did not make eye contact throughout the night. Britt served as a paratrooper in the Army and encouraged his sons to join the armed forces. Taylor joined as an Army missile specialist and Terrell planned to enlist. On the night of the killing, Taylor was just going to sleep at an Army base in El Paso when his brother called him about their father.

“It didn’t feel real and it still doesn’t,” said Taylor Britt. “I still expect him to call just to check up on me. I could really use his guidance right now.”

Emotions continued to run high after the prayer. Everyone dispersed in minutes. Shortly after sunset, the last car disappeared onto Western Avenue with the flash of tail lights.

Photo: Friends and family pray over Taylor and Terrell Britt, both 21, at the spot their father, Todd James Britt, 51, was fatally shot in Vermont Knolls on Sept. 16. Credit: Jerome Campbell/Los Angeles Times

Todd you were bigger than life and stood out where ever you were. You took a piece of me with you.
Rest in Peace Power and Love.

Todd is missed by all who new him here at the V.A .Medical Center,I knew him for 17 years and when we spoke he was always a joy to speak with. Kind and positive words and always a smile.
His positive attitude elevated him from housekeeping through UCLA and on to a career helping others. Miss you.
Barbara

Todd was one of the best people I've ever known. I can honestly say I never heard a negative word come out of his mouth. Todd made me smile everytime I talked to him.

I'm going to miss you friend.