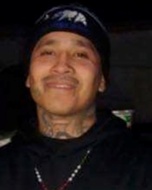 Cristian Gomez, a 31-year-old Latino, was shot and killed Wednesday, April 5, in the 2200 block of Whittier Boulevard in Boyle Heights, according to Los Angeles County coroner’s records.

About 11:20 a.m., Gomez was walking east on the sidewalk when a person driving a four-door silver sedan stopped and got out of the car, Los Angeles Police Det. Jose Ramirez said.

The person walked up to Gomez and fired two shots, one of which struck Gomez in the face, Ramirez said. The gunman then got back in the car and fled west on Whittier Boulevard, Ramirez said.

It’s unclear where Gomez was walking, but police say he had a girlfriend in the area. Gomez was pronounced dead at 11:29 a.m., according to coroner's records.

Police spoke with witnesses and obtained surveillance video that captured the shooting and helped identify a suspect.

On April 11, Josue Loreto, a 28-year-old Latino, was spotted driving the same vehicle seen in surveillance video of the shooting, Ramirez said.

Loreto led police on a pursuit before circling back to his apartment, where he was taken into police custody, Ramirez said.

He has been charged with one count of murder and one count of fleeing a pursuing peace officer’s motor vehicle while driving recklessly, according to the Los Angeles County district attorney’s office.

Loreto is scheduled to be arraigned May 17, according to online court records.

Do you have information to share about the life of Cristian Gomez ? The Homicide Report needs your help. Please fill out this form or e-mail us at homicidereport@latimes.com.

Heaven couldn't wait for you see you when I get there I still can't believe that you are no longer here you left a lot of good memories with us you are not here but you will not be forgotten it's just a tough moment to go through you left us with broken hearts love you Cristian may your soul Rest In Peace.