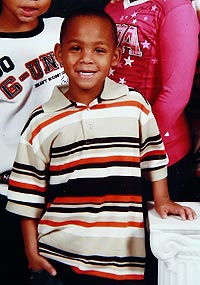 His injuries suggested blows or other trauma over an extended period of time, said Lt. Vincent Neglia of the Los Angeles Police Department's Abused Child Section. Police are searching for the boy's stepfather, Marcas Fisher, 36, as a "person of interest" in the case.

Dae'von's death appears to fit a pattern in which children have been killed after their cases had come to the attention of county child welfare officials.

Department of Family Services Director Trish Ploehn, who since taking office two years ago has made better accountability of social workers a top priority, said she's launched "a full and comprehensive internal investigation."

"This was a tragic and senseless death," Ploehn said. "I've had a full team of people looking at it all day."

On Friday, neighbors on South 87th Place tried to make sense of what had happened to Dae'von, whom they described as a sweet, well-behaved child. Relatives found him dead on the floor after being alerted by a frantic call from an unidentified person in his home. Fisher was not in the house when officers arrived. Neglia said that Fisher has "no history of violent crime" but that he does have a history of property crimes. The coroner's office had not determined the cause of death.

The county official, who was not authorized to comment on the case and therefore spoke on condition of anonymity, said the dozen calls reporting abuse or neglect occurred at various times in Dae'von's life. The source said county officials had opened an investigation after each call. But it remained unclear Friday whether social workers had concluded that abuse had occurred or whether the county had an active case file on Dae'von at the time of his death.

The boy's mother, Tylette Davis, 28, said Fisher had been with her when she was pregnant with Dae'von, but he wasn't the boy's biological father. She separated from him some time ago.

Davis said she never witnessed Fisher abuse Dae'von, but she said that about three years ago, Fisher "whipped" one of her older sons until "his butt was all red."

Supervisor Mark Ridley-Thomas, whose district includes South Los Angeles, called on the Board of Supervisors on Friday to appoint an independent investigator to thoroughly review Dae'von's case. Thomas said the probe should include looking at the boy's contact with Family Services and any other government agencies to identify any breakdowns that might have contributed to his death. The inquiry, if approved, would be the first of its kind since 2006.

"We need to get to the bottom of this," Ridley-Thomas said. "To have a county that has a stain on its image, to have children dying under these circumstances, is very, very difficult to bear....  The public has a right to have confidence that we are taking care of these matters competently."

The Times had previously reported that 14 children who had been evaluated by the Los Angeles County Department of Children and Family Services died last year. Some of those deaths involved breakdowns in the system in which some agencies knew about potential abuse but had failed to share the information with other agencies. In other cases, investigators found that poor decisions by social workers had contributed to the deaths.

The county Board of Supervisors has repeatedly been warned by auditors and other experts that the child welfare system lacks efficient ways to share information about risks faced by children. After the reports in The Times, the board last month voted to approve a new effort to ensure that agencies share information.

Photos: Top: Dae'von Bailey was found beaten to death in his South L.A. home. “He smiled when he would see me,” a neighbor said (Los Angeles Times).Bottom: Stuffed animals and votive candles sit at the front door of the house where Dae’von Bailey died (Robert Gauthier / Los Angeles Times).

Do you have information to share about the life of Dae'von Bailey ? The Homicide Report needs your help. Please fill out this form or e-mail us at homicidereport@latimes.com.

I truly miss you not a day goes by that I don't think of you nor talk about you I wish you was still here I still hurt I still cry I miss you little brother
Your big sister 😍😘😎❤️😇🙏🙌
PS:my oldest son is named after you dae'von Harrison

My grandpa went to his funeral when I was 14 now I'm 23 looking back on this. This makes me very angry he would have been 15 r.i.p.

I have an 11 yr old boy and I'd be dead before anyone ever repeatedly hurt my son. I looked up this joke of a mom and saw an old Myspace. Just had to know what the sorry woman looked like. She should be ashamed of herself. And she has several other children, get her tubes tied please mothers that abuse their children or allow it should be neutered

I remember holding him as a baby when his biological father brought him over. He was quiet, sweet, and cute.

Such a shocking life for an innocent child to exist day to day until he can take no more at the hands of a monster! What is wrong with mothers of young children who take up with men who are not the fathers of there children and put their kids at a very high risk of being abused? This beautiful little boy Daevon Bailey never stood a chance! Wake up to yourselves mothers of the world!

Why did no one protect him? Where was the mother? I know you are an Angel in heaven watching over.

Poor kid. Such a waste of life.

poor little man didnt have a chance, not only social workers but neighbors and teachers need to keep their eyes and ears open to protect the children, for if a mother alone cannot protect her child what hope has he to survive. every child that dies like this has been let down by the family,and the system. R.I.P Daevon