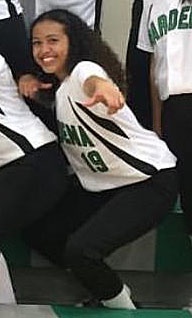 Danah Rojo Rivas, a 16-year-old Latina, was shot and killed on Wednesday, Nov. 23, in the 12600 block of Long Beach Boulevard in Lynwood, according to Los Angeles County coroner’s records.

A $30,000 reward is being offered for information leading to the arrest and conviction of the gunman who fired at another car, missed, and struck Danah instead, as the Gardena High School junior was returning home from church with her family.

Danah was sitting in the back seat of her family’s car, holding their pet poodle, when her mother, the driver, stopped for a red light near the corner of Euclid Avenue and Long Beach Boulevard about 9:34 p.m., said Los Angeles County Sheriff’s Sgt. Marcelo Quintero. Her 18-year-old brother was sitting in the front passenger seat.

Unbeknownst to the family, a car behind them was trying to escape from a car-to-car shooting, Quintero said.

There was a bottleneck of traffic at the intersection, and the target car, a burgundy Saturn SUV, couldn’t move forward. A man got out of a gray sedan and began shooting at the SUV, Quintero said.

One of the rounds went through the back panel of the Rivas car, striking Danah in the upper torso.

The shooter got back into the gray sedan, which sped west on Euclid Avenue, out of view, Quintero said.

Danah's mother turned right onto Long Beach Boulevard, but quickly pulled over when she realized her daughter had been shot, Quintero said. Her brother pulled Danah from the car to help her, and someone dialed 911. Paramedics were unable to save the girl, who was pronounced dead at the scene at 9:45 p.m., according to coroner’s records.

Danah's mother and brother were not injured, Quintero said, but in the confusion, the family's frightened poodle jumped out of the car into the street and was killed by oncoming traffic.

No one in the Rivas family is involved in gangs, Quintero said, but investigators believe the gunman and intended victims were gang members.

The Rivas family had just left a pre-Thanksgiving service and dinner at the New Horizon Missionary Baptist Church near Oak Street and Euclid Avenue, the church where Danah often volunteered, according to KABC-TV Channel 7.

Danah was a junior at Gardena High School, where a memorial service organized by student leaders drew a standing-room only crowd on Nov. 30, said athletic director Deborah Wallace.

Her softball coach, Melissa Ramos, said Danah was an excellent student and athlete, becoming co-captain of the varsity team when she was just a sophomore.

“She was a coach’s dream,” Ramos said. “Her favorite position was shortstop but she was my utility player. She didn’t care what position she played as long as she was out on the field. Her heart just poured out in the field, and to every player as well.”

Danah told her coach she wouldn't be playing this year, though, because she wanted to start working to help her mother pay the bills -- she had plans to go to a four-year college, Ramos said. “I felt like that was just the most noble thing you could do, to put something you love aside to help your family.”

Friends of the family set up a fundraising account to raise $5,000 for funeral expenses. The account raised three times that amount within 10 days, and is no longer taking donations, according to the site.

In the interview with KTLA, Ethan Rivas quietly asked for people to come forward with information about the shooting. And he had a message for the shooter as well.

“Your lousy bullets cost the life of my sister," he said. "Whether you get caught or not, the burden will live on you that you took the life of a 16-year-old. ... She won't be able to experience a multitude of things because of you, and that will be your burden to carry for the rest of your life."

The Los Angeles County Board of Supervisors approved $20,000 for the reward, and a private contributor is putting up the rest of the money, according to the Sheriff's Department Homicide Bureau.

Do you have information to share about the life of Danah Rojo Rivas ? The Homicide Report needs your help. Please fill out this form or e-mail us at homicidereport@latimes.com.

Share a memory or thought about Danah Rojo Rivas

I’m so sorry about what happens to her. Nobody should take life away. The shooter will have a special place wating for him if he doesn’t regret for what he’s done.

Absolutely heartbreaking story. I live in europe and only found out recently about Danah's story - I was touched and saddened at the fact that she had to go at such a young age. We're about the same age and did not do anything to deserve any of this. She's in a better place now, and my thoughts go out to her family and friends.

Danah was an amazing person. Even after all this time I can't get over not seeing her gorgeous smile at school. I used to go to her job once a week and she knew my order by memory because it was always the same. I miss her sweet personality. She will forever be loved and remembered.

Just read this for the 1st time. Im originally from now in vegas. This story is just so devastating. May the family find peace in this. My condolences