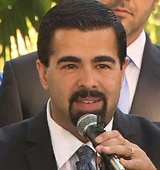 Daniel Crespo, a 42-year-old Latino, was fatally shot Tuesday, Sept. 30, in the 6300 block of Gage Avenue in Bell Gardens, according to Los Angeles County coroner’s records.

About 2:30 p.m., Crespo, the mayor of Bell Gardens, was in an argument with his wife, Lyvette Crespo, 43, when their 19-year-old son intervened, L.A. County Sheriff’s Department officials said. The mayor punched the teenager in the face, prompting his wife to grab Crespo’s handgun and shoot him three times in the upper body, said sheriff's Lt. Steve Jauch.

Jauch said that detectives were working to establish whether forensic evidence matched the account of the shooting, which was gathered from interviews with the mayor’s wife and son. Daniel Crespo Jr. and his mother had visible facial injuries that required medical treatment. When the mayor’s son was questioned by investigators, he backed up his mother’s claim that she shot Crespo to save the teen.

Lyvette Crespo was questioned and released without an arrest being made, according to sheriff’s officials.

All evidence will be presented to the district attorney’s office to determine whether charges will be filed, according to officials.

Lyvette Crespo’s attorney, Eber Bayona, told reporters that her husband’s death was a “very tragic loss for the family.” But, he said, his client had long been a victim of domestic violence — and was prepared to show investigators statements, photographs and other evidence.

“I never saw any evidence of that. Show me the evidence,” he said. “It has to be proven. She doesn’t want to go to jail — that is why she is saying that. I just want justice for my brother.”

Sheriff’s officials said there were no prior law enforcement calls to the family’s Gage Avenue condo, and neighbors told the Los Angeles Times that they hadn’t noticed any problems between the couple.

Any new stories on Wife of Daniel Crespo?

I agree with jessiejames. I hear he was not a nice man. But the matter to the fact is he was murdered. Nice or Not his wife should be prosecuted to the fullest extent of the law. If it had been me I would have been put under the jail that very night. Who does she know down there in the district attorneys office anyway.

— jessiejames
How about some proper punctuation so we can understand what you're saying? It's kind of hard to read when you're run-on sentence is a paragraph long! If she was released, the detectives must've seen it as self defense, period.

oh my god i can not believe this if it was the other way around he be in jail waiting on charge's she need's to be held accountable this is so wrong you beat a dog and do time cruelty to a animal she has taken this man's life and it's ok she shot him several time's she wanted him dead plain simple i hope his family push's the issue a petition to bring justice for this man blessing's to his soul ....

Well, if his wife has difficulty coping with the death of her husband ... maybe she shouldn't have shot him.

I worked with Crespo for years at the Probation Department. I was in shock when his face flashed across the screen, by the time I said is that Daniel Crespo, his name followed. This is a difficult situation and hope his son, daughter and wife are able to cope through this. Things are typically more complicated than you can imagine. This is really sad all around.