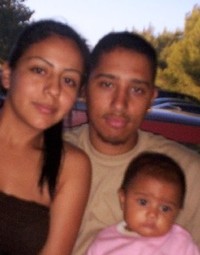 Daniel A. Marrero, a 20-year-old young man of Puerto Rican descent, was fatally shot in the chest, allegedly by 14-year-old Miguel Monroy, who was then attacked and killed by Marrero's companions.

Marrero was transported from the scene at 44068 Engle Way in Lancaster, and died at a Antelope Valley hospital at 12:09 a.m., Friday, Sept. 28. Investigators would like to know who all the combatants were. Anyone with information, including anonymous tips, is asked to call (323) 890-5500.

This was, in essence, a brawl that resulted in a death for each side, said Sheriff's Det. Howard Cooper. He said said that five to seven young men and youths, some of them gang members, were fighting in the walkway of an apartment complex. In the midst of the fight, 14-year-old Monroy pulled out a gun and shot Marrero.

In revenge, Marrero's companions jumped on Monroy beat the youngster, then shot him. In the end, Monroy died from a combination of blunt force and gunshots while Marrero, the man he shot, was still struggling to survive. When deputies arrived, they found both of them on the ground--Marrero badly wounded, and Monroy lying nearby, dead. Marrero died an hour after Monroy, his alleged killer.

Marrero's father, Andy Marrero, described his son an "intelligent kid" who "made mistakes" in life but was not a gang member. He said Daniel Marrero was a high-school graduate, married, and the father of a 2-year-old daughter.

Andy Marrero said his son counted gang members among his childhood friends, however--much to his dismay. Father and son had words about it. Daniel also had some run-ins with the law, but was trying to straighten out, his father said. He had gotten out of jail recently after serving a sentence for stealing beer, and, with his father's encouragement, he was making preparations to join the army. He was looking forward to it. "Danny was no angel...But he was getting ready to embark on a different life," said his father, who works as a security guard in New York.

The father expressed pain both at his son's death, and the death of his son's alleged killer, which he said has denied the family justice in the case.

Do you have information to share about the life of Daniel Marrero ? The Homicide Report needs your help. Please fill out this form or e-mail us at homicidereport@latimes.com.

This is my dad

The first boy I ever had a crush on Daniel I love you and miss you more and more I will never forget when we got held back and u said I need to go to seventh grade so.I can get off punishment lol