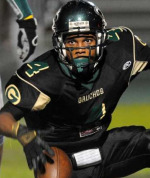 Dannie Farber, an 18-year-old black man, died after he was shot in the shoulder, chest and left thumb on Sunday, May 24, in the 1900 block of West Rosecrans Avenue in Compton, according to the Los Angeles County coroner's office.

Farber, an All-City wide receiver from Harbor City's Narbonne High School, and a female friend were eating at Louisiana Fried Chicken in Compton about 9:40 p.m. when a man walked through a side door and approached their table, police said.

"Where you from?" asked the man, who was wearing a black hood pulled over a black baseball cap.

"What are you talking about?" Farber asked as he stood up.

The man shot Farber several times and ran out the same door, Los Angeles County Sheriff's Det. Eddie Brown said. Farber tried to crawl toward the door but collapsed near the counter.

Brown said that Farber was not in a gang and that police are still looking for the gunman. Farber would have graduated from high school on June 19.

According to the Los Angeles County district attorney’s office, on Feb. 14, Watson was charged with one count of murder. At an arraignment in March, he pleaded not guilty to the charge.

His next court appearance for a preliminary hearing setting is scheduled for April 27 at the Compton Superior Court.

Watson is being held at the Men’s Central Jail in downtown.]

Share a memory or thought about Dannie Lamont Farber

I'm so so saddened to hear of the senseless death of any of young black men. However the sadness is compounded when the young man is just a all around good boy. A boy who had so much to look forward to and was just beginning his life. There really is a special place in hell for a monster who could so cowardly end the.life.of.someone who clearly was not involved in the nonsense that caused a monster to end his life. I pray that you will find peace and comfort in knowing that there is a God and he will help you and your family with every waking moment. May God Bless You.

Writing with solidarity from Sydney, Australia. We grew up here emulating your hiphop styles and culture, Compton is well known here and your community is much loved so it is sad that i'm reading about all these shootings, some of them random and the young age of many victims. i understand how it is .. life isnt easy money isnt easy to get.. the whole world sucks really.. even here we are a rich country but always seem to be going backwards with minoritys always most under the pump. anyway shout out to you all.. stop the shootings and killings.. you arent the only one with a tear in their eye reading these stories.. you are not alone.. i hope things get better soon. peace

syscom where did you attend school? The word is speech. I think the question you were trying to ask was is the use of the words "kick it" considered to be gang speech. If so then just about everybody is in a gang. I kick it with friends and family all the time. Do you now consider me a gang member?

I reside in Compton... This is a place where you need to step up to anyone to gain respect. Unfortuantely, young kids are getting more involve in the gang life, so sad.

Blessings to his family.

RIP Dannie. LOL@syscom3, man you missed the mark this time. Nothing in the statement "rest in peace my nigga dannie man we used to kick it alot u was a good dude man i hate that this happen to u bro but u are in a better place now...." is gang "talk" LOL! "Kick It" is a universal term for "hang out". And while "nigga" is slang that is used among blacks to identify each other, it is not tied to gang activity. Dannie was a hard working student that was making a better way for himself by playing football and doing well in school, there was hope for the future of his that was sensibly snuffed out because he refused to ask a question that young black men, like Dannie, are asked almost daily in that area.
RIP Dannie.

The guy wont be eligible for parole for another 40 plus years. His life is going to be one lonely and boring existence.

No, it's not gang speak.

syscom3 your an idiot! He wasn't in a gang, it says so in the reports which u seem to believe so well. Go some where else with your stupid questions

-syscom3, for someone who claims that their life is ALL peaches and cream, you sure do spend A LOT of time reading what goes on "In the HOOD". What's the fascination? Is YOUR life THAT boring?
That's really PATHETIC!

These kids are insane.

"where are you from?" Thats all it take's now a days?

If he wasnt in a gang, he was sure no stranger to them. The belt on the man in the picture speaks volumes.

Is that gang speak?

rest in peace my nigga dannie man we used to kick it alot u was a good dude man i hate that this happen to u bro but u are in a better place now....

Arlon Watson is accused of this murder and is awaiting trial.

I was just with you the Saturday before, Danny. I hope and pray that your death is a messoge to all the young black and mexican men, in this city, that life is too short. God Bless your family.