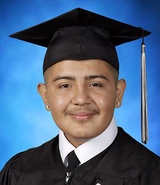 David Amaro-Poblano, a 17-year-old Latino, died on Friday, Feb. 22, after he was shot near the intersection of West 146th Street and Halldale Avenue in Gardena, according to Los Angeles County medical examiner-coroner's records.

David, an honor student and varsity soccer player, was riding with his mother and girlfriend  around 6:30 p.m. to deliver invitations to friends and family for his sister's ninth birthday party, which was planned for the following day, said Gardena Police Det. Patrick Goodpaster.

His mother, who was driving, parked outside the home of a family friend to deliver an invitation and after about 10 minutes David got out of the car to see how much longer she would be, Goodpaster said.

As he was walking toward the house, someone began shooting, and David was struck by gunfire, Goodpaster said.

During a press conference about the shooting on Feb. 25, David's mother, Delia Poblano, said she ran outside when the heard the gunshots and her son called to her, saying, "Be careful, Mama," before he collapsed.

David was taken to a nearby hospital where he was pronounced dead at 7:35 p.m., according to coroner's records.

Gardena Police Chief Thomas Kang said during a news conference that David was struck multiple times by gunfire, including one shot near his heart. The autopsy is pending.

Investigators don't have any motive for the shooting, and no description of the shooter, except for a light-colored sedan that was seen leaving the area around the time of the shooting.

"So far it seems we only have ear witnesses," Kang said. "There were vehicles leaving the location around the time of the shooting and those are people we really need to contact because we're sure they may have seen something at that intersection at 146th and Halldale."

Kang emphasized that Gardena "is a very safe community. We've had no problems in that area for at least the last five years, so this is very surprising," he said. "It's really frustrating as chief of police to see this happening in such a family-oriented community."

On Feb. 26, the Gardena City Council approved a $15,000 reward for information leading to the identification, arrest and conviction of the people responsible for David's death, Goodpaster said.

David lived with his family in Gardena, and was a senior at Environmental Charter High School in Lawndale, Goodpaster said.

His principal, K.C. Fabiero, said during the news conference David made honor roll last semester, performed more than 80 hours of community service and was researching solutions for improving living conditions for people living in detention centers for his senior thesis.

Fabiero said David had applied to seven public and private universities and was accepted by several. He'd decided to attend Cal State Dominguez Hills, she said, where he hoped to study law enforcement or electrical engineering.

David also was a "stellar soccer player," Fabiero said, who played on the varsity team for three years, helping his team become league champions this year.

"We're a very small learning community with just 121 seniors and our program involves rigorous work by our students," she said. "He was really well known and well liked in our community. He's going to be really missed at our school, and it's absolutely making a heavy impact on our campus."

Investigators are asking for anyone with information about the shooting to call Goodpaster at (310) 217-9653.  Those wishing to remain anonymous should call Crime Stoppers at (800) 222-8477.

So sad.
Too the family. I am so sorry.
He sounded like a stellar young man.
I hope the killer is located.