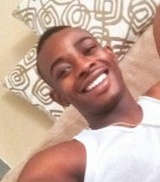 Delhaun Cordell Jackson, a 19-year-old black man, was shot and killed Monday, April 18, in the 1200 block of East 17th Street in Long Beach, according to Los Angeles County coroner’s records.

Jackson was pronounced dead at 8:54 p.m. at the scene, according to coroner’s records.

Family members told KTLA that Jackson was the father of a 1-year-old boy. The three other men were taken to hospitals, one in critical condition and two in stable condition.

The shooter remains at large and investigators are unsure if the shooting was gang-related. “Honestly, I don’t know what the motive is,” Zabel said. “We really don’t know what happened.”

Share a memory or thought about Delhaun Cordell Jackson

Every where I go I would bump into Delahun . He was everywhere and everytime I saw him he would have this big smile on his face . He would always tell me hi . Rip Delhaun , you will be missed .

Delhaun was a very kind hearted and loving father/boyfriend. his smile and laugh was one of a kind. its very sad that his life was tooken from us 3 days after celebrating our sons birthday. i miss my boyfriend so much. its a disaster knowing that my son has to grow up without his father being presence and the effect it will have on his life.

Before my son Delhaun Jackson was robbed of his life he was known for being Generous, loved to smile,
Very loving, family oriented, excellent
great cook, I miss my son dearly it's devastating his birthday July18th he would've celebrated 20yrs of life and 90days he was murdered.