A 61-year-old man is shot in his car. His anguished family says his life was at a turning point 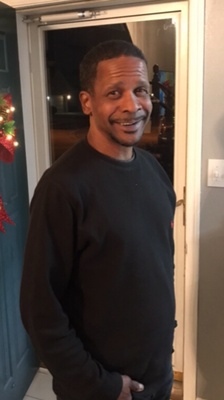 After spending three years as an ironworker in Los Angeles, Derek Wilson looked forward to his next steps.

Wilson, 61, had saved some money and planned to move back to the suburbs of Chicago where he grew up. He wanted to be closer to his family, especially with the upcoming birth of a grandson. In September, he had a family cabin trip planned to celebrate what would have been his 62nd birthday.

“He was just eager to come home,” said his sister, Kiayia Jackson.

On June 30 at about 1:30 p.m., Wilson was sitting in his white Subaru Outback in the 1600 block of West 107th Street in Westmont when a person walked up, fired about a dozen shots, and left in a dark-colored sedan, said Los Angeles Sheriff’s Det. Louie Aguilera.

Wilson, who died at the scene, didn’t have any gang ties. Investigators believe he was targeted, but are trying to figure out why.

Moments before the shooting, Christopher Harris, who lived with Wilson, had gotten home from his job as a painter. He spotted Wilson inside his car and waved. Once inside, Harris received news that his grandmother had passed, then heard a series of rapid gunshots.

His mind flashed from his grandmother to Wilson, sitting in his car. He ran outside to find his friend in the driver’s seat, lifeless.

“I just remember seeing holes on one side of his body,” Harris said.

Wilson’s friends and family are stunned by the brutal circumstances of the killing. They say Wilson, a father of four, was known as a family peacemaker who preached how short life is. He could make any situation positive, they said.

“He understood that there was good in everyone,” said Nicole Parrott-Wilson, one of his daughters.

Wilson moved to Los Angeles in 2017. He was recently married and looking forward to life after overcoming the substance abuse issues that had plagued him for years. He wanted to make money in L.A. as an ironworker for a few more years before retirement — a difficult feat considering his age, but he had found work.

“My dad went to L.A. with such dreams and hopes for his future and he was sent back to me riddled with bullets and in a box,” Parrott-Wilson said.

About a year ago, Wilson separated from his wife and moved in with Harris and his family, including his wife and three children. The two had gotten close working together at a job at Disneyland, and Wilson became a mentor to Harris.

Wilson gave Harris’ children nicknames, as he was known to do with his own family members. He tried to mediate when Harris and his wife got into disagreements. And he taught Harris how to fix his truck.

Wilson often talked to family on the phone and in recent weeks, his conversations with Theresa Parrott, Parrott-Wilson's mother, were centered around his move back to Illinois.

The two were supposed to go apartment hunting once he arrived. The night before he was killed, Parrott texted him several listings.

Parrott and Wilson were together for about five years decades ago, but remained close. Even when Wilson struggled with substance abuse, Parrott said she never gave up on him. because she knew he was “a good person and wanted to do better,” she said.

Wilson was at a high point in his life, Parrott said.

“Whoever did this should be prosecuted to the fullest extent of the law because there was no reason for this to happen,” Parrott said.

When Shamika Smith, Wilson’s niece, was due to have her second child, Wilson stayed at her home to care for her younger son and dog so her husband could be at the hospital.

“I’ve never heard no from him,” Smith said. Wilson, who was known as the family handyman, once fixed Smith’s car during the freezing Chicago winter.

Wilson also tried to unite his family when there were disagreements. He had recently called his daughter and scolded her, saying she needed to call her family more.

“It was my dad understanding the value of family,” Parrott-Wilson said.

Two days before he was killed, he left a message apologizing for the argument.

“I told myself I’d call him back in a day or two,” Parrott-Wilson said.

Now, Parrott-Wilson listens to old voicemails in which Wilson tells his daughter he loves her. In the recordings, he tells her how much he misses her and can’t wait to see her.

Parrott-Wilson said she’s frustrated that her father, who worked hard to deal with addiction and get back into ironworking, had his life taken away so suddenly.

“I think it’s really easy to hear about all the violence in the world and to be desensitized to it,” Parrott-Wilson said. “But this was my dad, this was someone … who loved me unconditionally, who loved his children unconditionally and was so kind and so loving.”