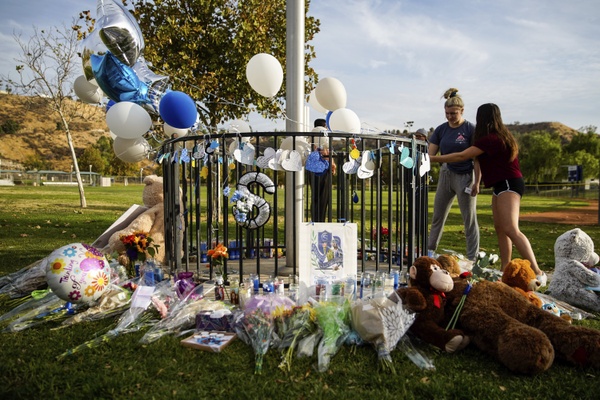 Dominic Blackwell, a 14-year-old boy, was shot and killed Thursday, Nov. 14 at Saugus High School in the 21900 block of Centurion Way in Santa Clarita, according to Los Angeles County Medical Examiner-Coroner’s records.

About 7:38 a.m., Dominic was shot in his high school’s quad. The shooter pulled a gun out of his backpack and opened fire on Gracie and four others, then shot himself.

The entire incident took 16 seconds. The motive in the shooting was unclear.

Dominic was the oldest of four brothers, a football player with a goofy grin.

A friend said he was “a little guy with a big heart.” Dominic was remembered by friends and family as a jokester.

His Instagram page includes the name “comedian,” a clear nod to his budding comedic persona.

Anthony Martinez, a student at Canyon High School, called Dominic not just his teammate, but his brother.

“He was always smiling, making people laugh, always positive, he was the sweetest kid ever,” Anthony wrote on Twitter. “We need more people like you.”

“This world lost a bright, shining light,” the page reads. “He was taken from his family and friends in the most senseless of ways. His three brothers will miss their big brother greatly.”

Photo: Students comfort each other at a memorial at Central Park in Santa Clarita a day after students were gunned down on campus. Credit: Kent Nishimura, Los Angeles Times

Do you have information to share about the life of Dominic Michael Blackwell ? The Homicide Report needs your help. Please fill out this form or e-mail us at homicidereport@latimes.com.

Share a memory or thought about Dominic Michael Blackwell