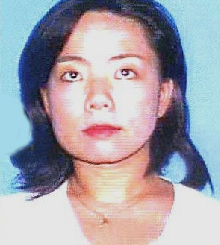 Eun Kang, a 38-year-old Korean woman, died Tuesday, Dec. 8, after she was raped and stabbed in the 1600 block of Electric Avenue in Venice, authorities said.

Ed Winter, a spokesman for the coroner's office, said the second unborn child was discovered by coroner's examiners the next day so the time of death is listed as 3:10 p.m. Dec 9.

The following is an excerpt from L.A. Now coverage of the killings: Suspect charged in rape, slaying of pregnant Venice woman spent time at state mental facility

Boneetio Kentro Washington, of Culver City, who is accused of raping and fatally stabbing a Venice woman who was two months pregnant with twins, spent time at a state mental facility earlier this year, according to law enforcement sources.

LAPD detectives said they are trying to determine whether he is connected to other crimes in the area.

Washington has been arrested and charged with capital murder.

Police said they believe the attack was random and that Kang didn’t know Washington. Santiago Ortiz, 62, who lived in the same apartment complex as Kang, said he did not see her very often because “she worked all the time.”

He said that when she ran into him, she always said hello with a smile. Ortiz said Kang moved in several years ago and lived in the apartment by herself.

“She was quiet and friendly,” he said. “I felt very sad that something so disturbing happened to her. It’s terrible.”

Share a memory or thought about Eun Y Kang

RIP pretty lady and your baby too

The tragedy in this murder is overwhelming. Prayers are given in the memory Eun Kand and the unborn twins. To her family, all I can say is I am so sorry to read of this loss. May God bless you all and the sweet memories of Eun comfort you.
Bill
Kansas