Everardo Castro, a 26-year-old Latino, was fatally crushed on Thursday, Jan. 24, in the 38000 block of 35th Street East in Palmdale, according to Los Angeles County Medical Examiner-Coroner records.

Castro and his sister got into an argument with her boyfriend, Esteban Reyes-Rojas, around 4 p.m., on a residential street, according to a Los Angeles County Sheriff's Department news release.

Reyes-Rojas allegedly got into his car, a tan 2002 Chevrolet Tahoe, and chased the brother and sister down, striking Castro and pinning him to the garage door of a house, Sheriff's Lt. Scott Hoglund said.

Castro was taken to a nearby hospital, where he was pronounced dead at 4:11 p.m., according to coroner's records. The cause of death was listed as crushing torso injuries.

His sister suffered non-life-threatening injuries, according to the news release. 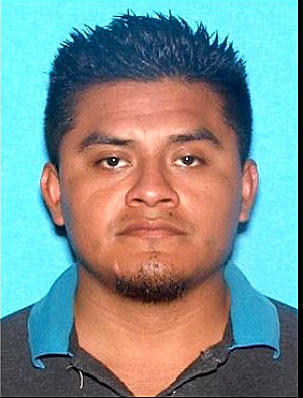 Investigators have identified Reyes-Rojas as the suspect wanted in connection with Castro's death. He is described as a Latino, 5 feet, 5 inches tall and 180 pounds, who frequents the Santa Ana area as well as Palmdale and Lancaster.

Photo: Esteban Reyes-Rojas, 25, is wanted in connection with the death of his girlfriend's brother, Everardo Castro, 26, on Jan. 24. He is accused of chasing Castro down with his vehicle, and pinning him to a garage door, fatally crushing him.

Do you have information to share about the life of Everardo Castro ? The Homicide Report needs your help. Please fill out this form or e-mail us at homicidereport@latimes.com.