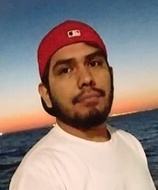 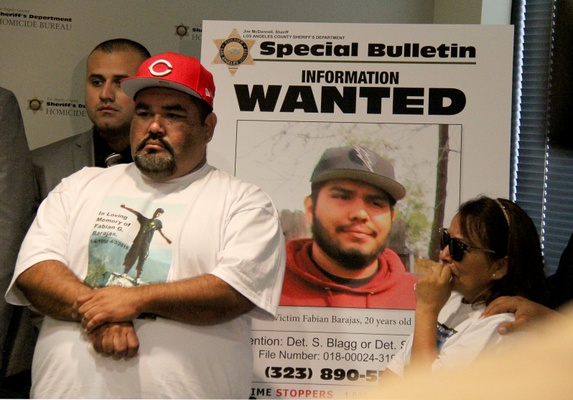 Barajas worked as a machine operator for Niron Inc. at Earlgate Street and Lemon Avenue in Walnut, said Det. Steve Blagg.  His shift ended at midnight, Blagg said, and Barajas normally went straight home to Pomona, where he lived with his mother.

However, for reasons neither his family nor investigators know, Barajas drove east instead of west when his shift ended April 3, to an industrial area in El Monte, said Blagg.

El Monte police were called to the area about 12:25 a.m., after  Barajas’ white Infiniti G37 sedan crashed through a security gate outside a warehouse at 12368 Valley Blvd.

Barajas was inside the car, slumped behind the steering wheel with a gunshot wound, Blagg said. He was pronounced dead at the scene at 12:30 a.m., according to Los Angeles County coroner’s records. The cause of death was listed as a gunshot wound to the back.

Witnesses reported that Barajas was shot about a block away, at the end of a cul-de-sac on Gilman Road, just north of Valley Boulevard, Blagg said. Witnesses saw someone run away from the car, heading east along railroad tracks, Blagg said. Barajas drove away, but lost control of his car on Valley Boulevard.

During a news conference May 25, Blagg said witnesses reported seeing a Latino between the age of 25 and 30, roughly 5 foot, 6 inches tall and 160 pounds running away from the car after the shooting. The man was wearing a black Dodgers baseball cap, black jacket and dark pants, and has been identified as a “person of interest” in the shooting.

“Fabian was just a 20-year-old kid who loved cars, motorcycles and video games,” Blagg said. “He had no gang affiliation, no past arrests. He was just a good kid who lived with his mother, helping her with her life.“

The Los Angeles County Board of Supervisors approved a $10,000 reward for information leading to the arrest and conviction of the shooter, investigators announced at the news conference. 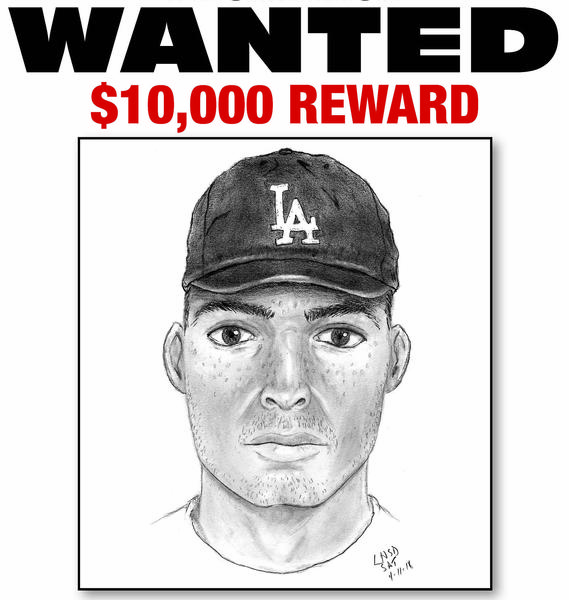 About 15 family and friends crowded into the Homicide Bureau’s small conference room. Many held signs demanding justice and some cried quietly as Barajas' parents pleaded for information that could help identify their son's killer. Most wore T-shirts with Barajas’ photo on front.

Her son was “very quiet, very obedient and very shy,” Eva Barajas said in an interview. “He never had a girlfriend, and he only had one good friend. He liked to look at cars, go to the mountains with his father and hang out with his family. He was very special to us.”

Eva and Fabian’s father, Fabian Barajas Sr., are divorced now, but the two met at Niron, where they both worked. Their son always loved to hear the story about how they got together, she said, “and he was determined he was going to work there too.”

His best friend, Guillermo Vasquez, said he'd known Fabian since they were toddlers. He was socially shy, Vasquez said. “He wouldn’t go to parties, and he always said he didn’t need a girlfriend because 'she’ll just take my money.’”

But Vasquez said his friend enjoyed eating out and exploring new places. “He was a caring, giving person who wouldn’t hesitate to help you,” he said.

Fabian Barajas Sr., said after the news conference that his son’s actions that night were so out of character that he suspects he was kidnapped and forced to drive to where he was shot.

“It’s hard to accept what happened here because my son wasn’t a person who would ever harm anybody,” he said, his voice breaking. “We have to find out who this animal is…. We all have kids. If we don’t stop him, he could do it again.“

Photos: Top, Fabian Barajas Sr. and Eva Barajas flank a large photo of their son Fabian Barajas Jr., 20, during a news conference at the Los Angeles County Sheriff's Homicide Bureau, asking the public for help in finding the man who killed Fabian Jr., on April 3 in an El Monte industrial area. Credit: Jeanette Marantos for The Times. Center: The Homicide Bureau is circulating this drawing of the person of interest whom witnesses say they saw running from the shooting scene.

Do you have information to share about the life of Fabian Garcia Barajas ? The Homicide Report needs your help. Please fill out this form or e-mail us at homicidereport@latimes.com.

Share a memory or thought about Fabian Garcia Barajas

My cousin was a good person
He will be missed and always in my heart everyday passes and i cant accept wat happened here ! We love you fabian ❤

Sorry for your loss, it’s possible he ended up giving the wrong person a ride that night, sometimes people are too trusting, hopefully they’ll find the coward(s)

Fabian is my godson. He was a very nice boy with his future shining very bright. He was a loving son to his parents who loved him with all their hearts. His life was taken from him by a coward. We are devastated by his loss and hope justice is served quickly. Son we love you dearly, may you rest in peace.

From your god parents,
Pete and Ana Quezada