Families and advocates for homicide victims honored at yearly event 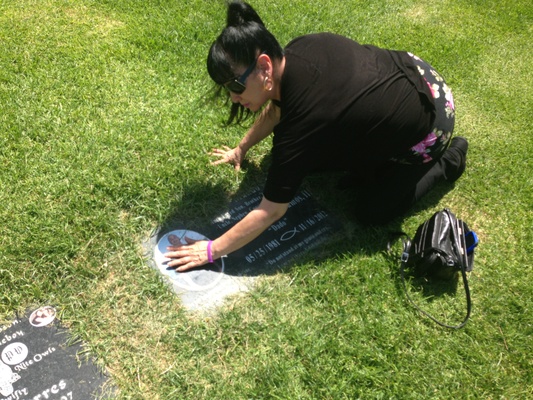 Rows of more than 250 photos were propped up like headstones in Rose Hills Memorial Park in Whittier.

The posters formed rows in line with the grave markers in the ground, but the names did not match those on the granite slabs.

Ranging from young children to the elderly, these are the faces of homicide victims. One photo shows Joseph A. Jaquez, 13, who sits in a white chair with a boyish grin. He was killed in 2009 when two men walked up and shot him in Oxnard. Another photo shows 27-year-old Neal Williams holding the hands of his sons Devon, 7, and Ian, 3. All three were killed in their Rowland Heights home in 2007.

For 31 years, friends and families have gathered here to honor those who have been killed violently and to pursue criminal prosecution for their killers.

“We are here today to show that you are not alone,” said Jane Bouffard, president of Homicide Victims’ Memorial Foundation, which organized the event. “And we are here to help you find answers so you can seek justice for your loved ones.”

Several people were recognized for their contribution to the rights of victims' families. The organization remembered Marcella Leach, 85, who died last month. Leach was one of the founders of Justice for Homicide Victims in 1984 and helped push for Marsy’s Law, a proposition passed by California voters in 2008.

Marsy's Law expanded the rights of crime victims and their families, and is named after Leach's slain daughter.

LaWanda Hawkins, a founder of Justice for Murdered Children, received an award for her work helping homicide victims' families.

Reginald, her 19-year-old son, was found dead in San Pedro 20 years ago. Since then, she has provided support and pushed for the rights of victims' families. Hawkins and her group will receive national recognition this week from U.S. Atty. Gen. Eric Holder Jr.

The event also celebrated people who sought justice on behalf of their loved ones. Audry McDonnell told the crowd of about 100 that her family waited 30 years to get a conviction for the two men who killed her cousin, Richard Hernandez.

She said the prosecutor did not push for a tough sentence, so the family stepped up as advocates.“We wrote letters and encouraged others to show the impact my cousin made on the community,” McDonnell said. “The judge said these letters made a difference, so I encourage others to not give up. You don’t know what could happen if you make your own way.”

Following the ceremony, pink and blue balloons sailed away with messages written from friends and family. People also lined up to light a candle and announce the name of their lost loved one.

A group of women from a support group in the San Gabriel Valley listened in a circle under a nearby tent. Margaret Ramirez sat in the center with an image of her son, “Little Toni,” on her shirt.

“I used to think this only happened to families with gang-bangers or broken families,” Ramirez said. “Nobody is safe.”

Her son, Antonio Ramirez IV, 17, was fatally shot outside a house party in West Puente 13 years ago, and the killing is still unsolved.

He called his mother several hours before to say he loved her.

“You’re a mom and you want to fix everything for your children, but you can’t fix this,” Ramirez said. “You wanna die sometimes.”

Near the entrance to the cemetery, Margie Flores scoured every speck from her son’s grave marker in the ground. She plucked a blade of grass casting a shadow around the granite slab. She stroked the gravestone photo with her fingertips.

Armando Ramos, 31, was killed in November 2013 while trying to stop gang members from beating up a man, she said.This is her second visit since his burial.

“This event has reminded me that I’m not alone. That I can deal with this, in my own time.” Flores said.

Police caught the suspects the same day, but Flores is still waiting for their trial. And while she had a chance to cope, the time has not allowed her to completely heal.

“My fear is that time will pass and the witnesses will disappear,” Flores said. “ The wait can be so frustrating for the people left behind.”

I also lost my youngest to a homicide he was not a gang member nore was he drug dealer he was ambushed on a corner by his fathers house in the next county over .i cant find a support group around my area thank,u they stopped working on his case 3 weeks after he was killed

It will be 3 yrs May 6 that I lost my son to a senseless homicide. I like Mrs Ramirez thought the same way my son wasn't a gang member didn't come from a broken family/home this wouldn't happen to us But boy was I wrong !!!
We raised him to be responsible, respectful, caring and he was and in a matter of a second he's gone and we might not even ever find out who did it because homicide det. have to many cases to try and find the person that did it and because people that see things happen don't say anything !! The pain of losing a child MY SON is like no other it's torture having to live without your child