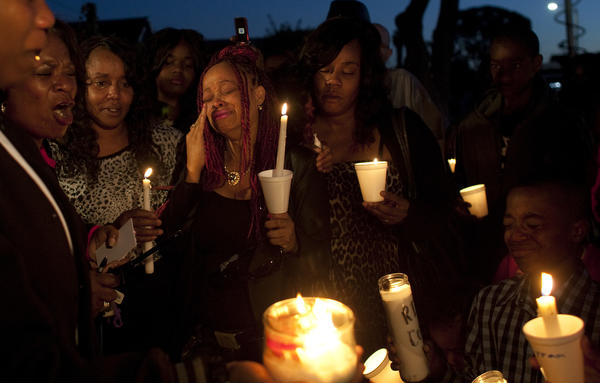 In many ways, Elawnza Peebles was a kid who was just starting to come out of his shell.

He was described by family members as a bit of a homebody, a quiet 14-year-old who liked video games.

At a vigil Monday night, friends and family grieved for the boy, who was shot and killed Saturday night while walking home about 9:40 p.m. in Vermont Square.

Detectives are unsure if the gunman was on foot or in vehicle and are asking witnesses to come forward.

Saturday night, Porshea Merritt was standing on her porch a few houses down when her cousin told her someone had been shot. She walked outside, saw Peebles in the distance in a pool of blood and called 911.

“He was there in the fetal position,” she said.

Merritt, 25, has lived in the area her entire life. She said her street has grown quieter in the last few years: “I hear gunshots, but they’re not so close.”

Now, Merritt says, she won’t let her 4-year-old daughter play in the frontyard. She’s afraid to walk to the store.

“He could have been on my sidewalk,” she said.

Peebles, a ninth-grader at Manual Arts Senior High School, sometimes liked to take apart cellphones and other electronics. He was still afraid of the dark, said his grandmother, Brenda Chatman.

Robert Whitman, the principal at Manual Arts, said he was shocked to hear that Peebles had been gunned down. In the three years that Whitman has been the principal of the school, this is the first student who has been killed. 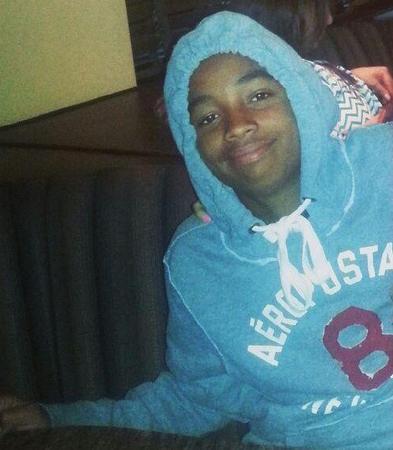 "He wasn't a bad kid," Whitman said. "He was very respectful."

He had recently moved to the area to stay with his cousin, Lakia Jackson.

“Everything is still how he left it too,” Jackson said.

Her son, Josiah Preston, 15, had hung out with Peebles that day. The two had gone to the USC campus to play basketball. Preston said that Peebles talked about one day going to Disneyland.

On the street where he was shot, candles and a poster with Peebles’ smiling face had been tied to a tree, along with a teddy bear.

“He still had the twinkle in his eyes,” said his mother, Carresha Skiffer, “that innocence.”

She added that her only child had never even kissed a girl.

At Monday night's vigil, dozens of people stood in a tight circle holding cups with candles inside. Many cried.

"We don't live in Baghdad; we live on a street in Los Angeles," she said.

Anyone with information about this incident is asked to contact criminal gang homicide detectives at (213) 485-1383.

Elawnza was a close friend of mines. It was so weird when I found out that he had passed because I literally talked to him a few days before that. He was so kind hearted and so funny. He could brighten your day with just a smile. He will be forever missed and will always have a special place in my heart.

Wow man i cnt belive he's gone ..he was so nice ...one of the coolest boys at my school he was quiet 2 lol man ...juaa know that we miss yuhh ..i didnt forget about you and niether did anyone else love you ...have fun your in a better place now ...:)

RIP to this young man. Perhaps he was a victim of circumstances or collateral damage. But simply blaming this type of repetitive behavior on the "Street Gang" is ludicrous. The parents of these young men and women creating havoc in our communities share the blame as well. They are not parenting period! Additionally, the Judicial System is aiding and abetting these types of crimes because without them there is no need for those fancy Court Houses, State of the Art Prisons and their Support Staff. Ask any prosecutor about his or her philosophy when it comes to fighting crime and they will say, "Give them enough rope, and they will hang themselves." The way I see it people, you have a two options. Move out of the neighborhood or get involved in your community. Hold your city leaders responsible and your neighbors responsible as well. If you know that Soe and Soe across the street or around the corner from you has a son or daughter creating havoc in the neighborhood, turn them in now! If folks with jobs can barely afford to live in the neighborhood, how do you think the thugs can afford to do so? They live with someone amongst us. Turn them in and clean up the neighborhood for you and your family.

The military is too professional for these thugs, they should join BLACK WATER, they're mercenaries trying to play soldier.

These senseless killings have to stop. Coward gang members need to stop murdering innocent children! Like this beautiful young man, another precious life was taken on November 11, 2013, Andrew Michael Stittiams, 19-years old. He was stabbed to death in NELA while walking a few blocks away from his home in the middle of the day. My deepest sympathy to the Family of Elawnza.

Jack,
What makes you think that any US armed forces would want this type of personality on its crew? Military are looking for very specific types and the gangbanger type does not fit in with what they are looking for. Oh sure every now and then one might slip through but over all this is not what the military is looking for...plus not only that I wouldn't want this type of person to represent the country that I love. It is bad enough when we hear stories about some idiot/service man that has commited a crime but to think that we gave him a gun and turned him loose on another country I couldn't and wouldn't want this type of person representing me nor would I want him fighting to defend my freedom. Sorry but there has to be a better answer then to just strap a gun to his chest and send him out as a representation of me.

The U.S needs to bring the military draft back. That way these killers will have a reason to shoot and kill. Most of these clowns are idol all day and that's the devil's playground. If you're not in school, working, or attending a jobs training program, or doing something productive, you should be drafted into a front line branch of the United States military overseas. That way gang bangers, criminals, and killers, can't be reunited with their homeboys and home girls in prison. At least tax payers money would be better spent for the betterment of the country. Instead of paying for idiots to sit around all day in jail.

I am so sorry for your loss. This youngster sounds like a good young man. Praying for your family. May justice come to the coward(s) who stole his life.

My God..My God...senseless just senseless could have been my son Lord have mercy something's gotta give to the family I have SIGNED..SEALED ..and DELIVERED MY PRAYERS FOR YOU..JESUS WE NEED YOU..what's wrong with these people taking innocent lives!!

I'm sorry for your loss. Those scumbags that killed this young man will eventually end up with the same fate.

My prayers and well wishes.

Under the Roger Browning Regime, Gangbanging, and the act of being a gangbanger or gangbanger wannabe are all capital offenses. Accordingly, all Gangbangers and wannabe gangbangers are systematically identified, tracked, Round up and targeted for elimination and execution, en-masse.

Very sad. Too many do not respect this beautiful thing called LIFE. I hope Elawnza's loved ones can find some form of peace that only CHRIST can give.