Each year, the march is stressful to plan, but Sean Earl and Mary Jackson do it anyway.

For four years now, Earl and Jackson walk with friends, family and community members to the site in Compton where their 13-year-old son, Draysean Earl, was gunned down on May 5, 2009, alongside Andrew Peppers, 16. 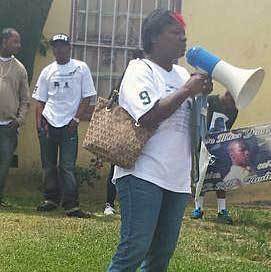 Forgetting is not an option. They don’t want the neighborhood to forget, either.

So they mark the day by talking about their loss. It’s hard to do, but for Earl and Jackson, it would be more difficult to stand idle.

“Our purpose is just to make a call for peace,” Earl said after the march Monday afternoon. He wore a white T-shirt with his son’s reward flier plastered on the front. The back of the shirt read, “We won’t forget.”  On the sleeve, the number 9 – Draysean’s football number.

Jackson is skeptical anyone will ever come forward to say whom they saw the day Draysean and his friend were killed, despite the $20,000 reward offered. Witnesses told authorities that Andrew and Draysean were hanging out with a group of as many as 15 boys and girls near a brick wall outside a home when a man walked up and fired five shots from a large-caliber handgun.

Witnesses described the shooter as a 17-to 20-year-old black man wearing a royal blue T-shirt and black jeans, but he has never been identified by authorities.

The bullets hit both Andrew and Draysean in the head. Andrew died at the scene, and Draysean early the next morning.

Draysean was enrolled in nearly all honors courses at Roosevelt Middle School and loved football. He had been offered two high school football scholarships and wanted to become an NFL player someday.  Since his death, there’s been a camp organized in his memory.

Andrew Pepper's grandmother, Loretta Corner, said he was a normal 16-year-old. She had been saving money for a car for the teenager. Corner had trouble talking about her grandson Monday, and deferred to his sister, Tamika Jordon, 25.

Jordon said that Andrew, a junior at Rancho Dominguez, liked skateboarding and wanted to go to college someday.

“If we could get some closure,”  Corner said. ‘It would lift a burden on my heart.”

Photo: Mary Jackson talks to community members Monday, May 5 at the shooting site where her son, Draysean Earl, 13, and his friend, Andrew Peppers, 16, were gunned down five years ago. Credit: Mary Jackson