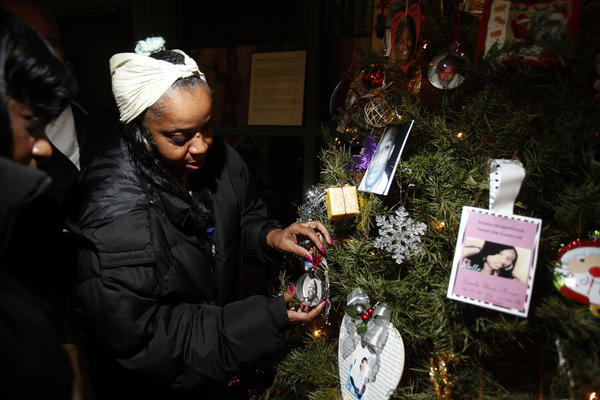 The tree ornaments varied in shape, size and color, and each one represented a person whose life had been taken away at the hand of another.

There was a blue ornament shaped like a bell. On the bottom was a photo of Elroy Schenck, killed in a car-to-car shooting on the 110 Freeway in July.

There was a red stocking with a photo of Rene Balbuena taped to it. Balbuena was killed in October after responding to an ad on Craigslist to purchase a cellphone for his son’s birthday.

Men and women lined up to place their individual ornaments – some hand-crafted, many with photos of the victims – on the tree in the lobby of the 77th Street Community Police Station as part of an annual event sponsored by the city attorney's victim assistance program, to honor the lives lost over the years.

There was a Santa Claus for the children and a toy giveaway. As children received the toys, the adults sat in a different room and spoke about their ongoing pain, a type that hasn’t lessened over the years.

Rena Shillings, 46, lost her 21-year-old son Patrick in October of 2009, an act that made her daughter an only child overnight.

The killing, in broad daylight in Northridge, forever changed this time of year for Shillings, who reveled in cooking during the holidays for her son.

“Every eating holiday was his favorite,” she said.

This is the fourth year that she’s brought an ornament, featuring her son’s smiling face, to the tree trimming.

“I just find comfort when I’m around mothers in the same situation,” she said.

Others came to the trimming for the first time. Geornice Judge, 43, dressed down in a cream colored sweater and matching glasses, was still trying to accept that her brother, Keyonta Ansari, 22, is gone.

She made a silver ornament with a photo of Ansari, killed in May as he was waiting for friends to go play basketball with him.  This is the only ornament she’ll hang this year -- she decided against getting a tree for her home.

“I just can’t believe it’s my brother,” she said through tears. “It still feels like he’s still here.”

Ansari’s other sister, Patrice Morgan, said she had been on the verge of committing suicide after his death. He is the fourth family member she’s lost since 2010.

One woman spoke of the bear hugs her grandson gave. Another talked of her son’s dreams of becoming a cop. Many spoke of the void they experience daily.

For Jocella Hurd Collins, the death of her son has become part of her holiday routine. She’s been coming to the event since it started 12 years ago.

Her son, Cedric Hurd, 26,  was killed one week before Christmas in 2001. He had been at her house that night, hanging out and wrapping gifts.

Though Collins offered him a ride home about 8 p.m., he decided to walk. It wasn't far. Collins got a call shortly after 9.

Her son, a father to a 3-year-old, had been killed in a drive-by shooting. Another daughter was born nine months later.

“This reminds me that I’m not alone,” Collins said after the event. “This provides me with peace.”

Photo: Dorothy Esked hangs an ornament for her brother Anthony Smallwood, who was killed Sept. 1. Several people hung photos of loved ones on a tree at the LAPD's 77th Street Community Police Station during a tree trimming meant to honor victims of homicide. Credit: Rick Loomis/Los Angeles Times

A previous version of this post said the program was sponsored by the district attorney's office and identified Cmdr. Bill Scott and Phillip Smith.

There will be one missing Christmas,
one place at table---bare,
one smiling face we’ll yearn for
just knowing you’re not there

One present left beneath the tree
after all have been passed out,
with pretty ribbon posed atop---
a heartfelt gift, no doubt

The snow outside---light falling,
of which you were so fond,
swift on skis and snowboard,
and skating on the pond

Cozy by a crackling fire
we’ll surely quiet sit,
recalling times your lengthy frame
would stretch in front of it

We’ll have to gather all our faith
and be of one accord,
knowing you are safe with Him---
spending Christmas with our Lord…