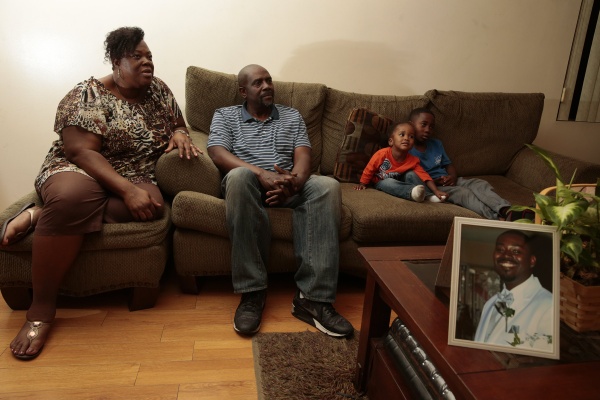 Rodney Hamilton prayed for peace while cradling his 28-year-old son's head. As he knelt in the street, blood began to pool around his knees.

He tried to get his son to pray with him, but Rhasson Hamilton could only gasp a few words.

"I asked if he could speak, but he struggled to get the words out. He just looked up at the sky," Rodney Hamilton said. "That was the last time I saw him."

The sound of sirens got closer that fall night, and family members kept a lookout for the ambulance. Neighbors stood in doorways, watching a father's last moments with his son.

That night, Rhasson had been celebrating the 44th birthday of his cousin Julian Warren, watching USC football and eating chicken wings with family and friends.

The group took a break after the Trojans lost to take photos outside and prepare for cake. Rhasson, who planned to go out with his girlfriend later, walked away from the crowd to his father's truck to grab a change of clothes. It was about 9 p.m.

The others headed back inside and gathered to sing "Happy Birthday." Warren leaned in over the cake, decorated with candles, and took a deep breath. Two gun shots rang out.

"They were loud pops like firecrackers," Warren said. "I told everyone to get on the ground. I waited about a minute, and then I went outside."

Warren spotted his cousin lying in the street next to the truck.

"I ran out to him and asked him if he was all right, but he was silent. That's when I realized he had been hit."

Police, who are seeking witnesses, say at least two people walked up to Rhasson that night. They described him as an innocent victim. 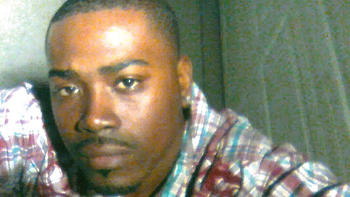 Rhasson grew up in the Green Meadows neighborhood of South L.A. Although the area has its problems with gangs, Hamilton's parents were close to their son and always encouraged him to focus on school. He played linebacker at Locke High School. In 2002, The Times wrote that "athleticism is his strength."

But music was his passion. Rhasson liked to create beats and his own mixes, a skill he gained from years of watching his father DJ at events. Rhasson performed at many local and family gatherings. His mother said he loved slow jams and often borrowed his father's CDs.

"He had an ear for the oldies," Pamela Hamilton said. "He really loved the Isley Brothers."

Rodney Hamilton said that moments after doctors told him that his son didn't make it, he prayed with his pastor, then prepared to face those who were waiting for better news.

"I will never forget the moment I had to tell my family in the waiting room," Hamilton said. "Their screams were unreal."

Hamilton said he isn't angry at the people responsible for his son's death. "They don't know who they touched. They touched an entire community."

Rhasson has three children, ages 10, 6 and 3. He would have turned 29 two weeks after the shooting, and his family had planned to celebrate with a party on the beach.

"It's just turf wars out here," said his cousin Warren, whose birthday they were celebrating that night.

Warren has lived in Manchester Square, where the killing happened, for three years. He knows that people have been killed down the block, and he's used to hearing gunfire.

"People shooting each other and now they think they got one. But they didn't. He was not in a gang. He was just living his life."

On the porch of his home, he braced himself against the railing, looking into the distance as he talked about Rhasson.

"We used to do everything together," he said. "Now my birthday will never be the same."

I mean what is this about? Just some negative karma left over from the really bad old days?

I am really sorry for the loss of Rodney. By reading the comments and the article, you can tell he was truly awesome. I remember the time when African American males in my age bracket would talk about "justing makin it to age 25." Now it doesn't matter how old you are. Ugh!!!

It is a shame that black men kill more black men than the KKK. These street gangs are designed to kill black men and that is their sole purpose. We accuse law enforcement of racial profiling but the gangs do just the same. See a black man and kill him

You don't need to be a gang banger to end up like Rhasson. It also happened to my co-worker who happened to be the person some gangster wannabe shot with a large caliber revolver. Best guess remains that it was just some kind of initiation ritual. Remembering those awful days, My heart goes out to the Hamiltons.

People need to understand what living in South LA is all about. Do not step outside when it is dark, period. Number one focus in life should be to save up enough money and move out asap. Its one thing for gang members to shoot at rival gangs, but its another when innocent people are getting mowed down. Wake up and realize the turf you are living on. Be out!

I cannot even express how sad this makes me. Though I worked much in this community many years ago, I saw many innocents and promising young men from strong families with great character and moral value end in similar tragedy. But Rhasson was a promise to the World. Those that haven't the family strength, that will only present terror to the World took his life. For the years he gave, I salute his family and I salute Rhasson. Thank you young angel for your service and contribution here on Earth. You will be praised in Heaven I am certain. Blessings and God speed your families deep pain.