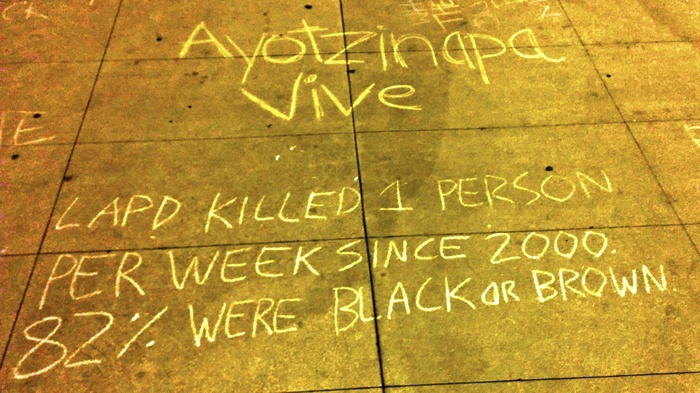 The Homicide Report receives dozens of reader comments each week. Many reflect the lasting grief of families and friends who have lost loved ones to violence.

A reader who called himself Ricardo Molina Jr. wrote this note Nov. 26, more than four years after Ricardo Molina was shot to death at age 28 in East Los Angeles.

I miss you, big guppy. Yeah, you were a gangster, but you were my dad. I'm so jealous of these other kids who get to kick it with their dads. I wish I could've had that time with you, but you can't turn back the hands of time.

I have dreams with you, me and my mom, but the sad part is I wake up in the sad reality that that'll never be.

Anyway, thanks for giving my life. If there is a heaven or an afterlife and you can see this, tell my grandpa that I miss him too and still cannot forget that last conversation we had. Anyway, I love you, Dad. Take care. Your guppy's all grown up.

Reader Trika wrote Dec. 1 about Justin Ford, who was 23 when he was shot to death by Los Angeles County sheriff's deputies March 14, 2011.

Haven't been on here in a while, but not a day goes by that I don't look up in the sky and remember my friend.

I thought that as time went by this would've gotten easier by now. But no matter how much I try to make peace with you being gone, it still hurts the same. I love you, friend, and you will forever be in my heart!!

Scottie was my very first boyfriend. We went together for several years in the very early '70s. At that time Scottie had a '64 Chevy Impala, which he was very proud of! That car had six batteries in it, which operated the 'lifts.' It was black and white pearl with black and white crushed velvet, diamond tuck seats. His logo written on the door was 'Mr Big Stuff'!

I miss Scottie, and I think of him often. May he forever rest in peace.

Several commenters took issue with a recent fact-checking of a chalk scrawl that a Times staffer photographed during protests of the Ferguson, Mo., grand jury decision. The writing on the sidewalk outside Los Angeles police headquarters said the department had killed one person per week since 2000 and that 82% of those killed were "black or brown." Research by The Times' Armand Emamdjomeh showed that the first claim is wrong. The claim about the percentage is close: Countywide, 77% of people killed by law enforcement were black or Latino; 81% of people killed by LAPD officers were black or Latino.

A few of the comments on that report deserve a response.

This article conveniently ignores the fact that many of those killed by LAPD or other Southern California police during that time period were armed, and some were actually engaged in gun battles with police. Calling such killings 'homicides' is a misnomer and is meant to make law enforcement agencies and their officers look bad.

The article did not address whether anyone killed by a law enforcement officer was armed or involved in a gun battle. That was beyond the scope of the fact-checking. And as the original report noted, the word "homicide" is used very precisely on the Homicide Report: It is the killing of a human being by the hand of another, as determined by the county coroner. There is no judgment in the term and is not intended to make law enforcement "look bad."

It would be interesting to know how many LAPD officers lost their life in this same period of time.

From 2000 to 2013, eight Los Angeles Police Department officers were killed in the line of duty, according to the department's website. Two of those — the shooting of Ricardo Lizarraga in 2004 and the shooting of Randal Simmons in 2008 — were determined to be homicides by the L.A. County coroner. The other deaths were in car crashes, military service or training accidents. Six LAPD officers — on duty and off — have died this year. None of those deaths was ruled a homicide.

(The comments published here have been edited for style and grammar.)

Photo: A statement written in chalk on the sidewalk outside LAPD headquarters during the Ferguson protests. Credit: Ben Welsh / Los Angeles Times

Reading this stuff is so sad for reasons other than the loss of life.
SIX batteries in the 64' Impala.....
"gonna grow up and be a rapper".....

The CULTURE of these idiots is what is killing them all...the wrong goals, visions and ideals.
Gang life...BLING........ridiculous and absurd material WORTHLESSNESS that is so unimportant in a world or environment where education is lacking, simple necessities .....

Ghetto people need to evolve beyond the mindless goals of obtaining "Bad Ass Thug" of the week stature.....or some ridiculous gold chain or low rider car.

If that is true, that's problematic. However, if Gangs and other Criminals in the city had a similar #Homicide statistic, I belive that a lot of people gone forever, would still be here! Cops have a public relations problem right now no doubt. And I'm sure in very short order, they will do some internal house cleaning. But what about the bigger problem like Gangs? I have yet to see anyone protest them or antagonize them smh....