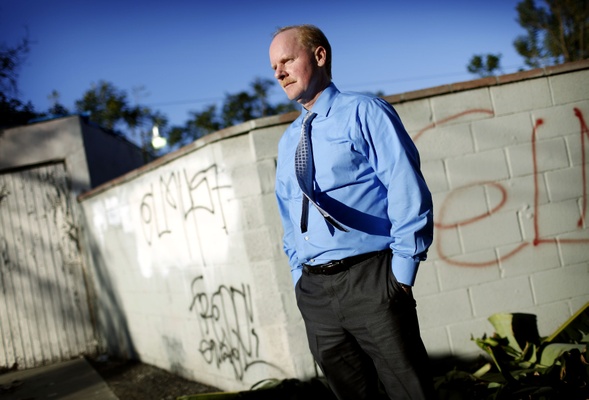 Dan Willis was in the middle of investigating one of the most emotionally-draining cases of his career.

Willis, a La Mesa police detective, believed there was a connection between the disappearance of a man from his San Diego County city and a headless body found in a Compton alley in December 1992.

He had the homicide transferred from the Compton Police Department, and it became all-consuming.

“You can’t just cut off somebody’s head and get away with it,” he told himself.

The work, Willis said, takes a toll. But admitting that reality is often a taboo among law enforcement’s rank and file. Willis, now retired, has written a book geared toward first responders about emotional wellness and survival, and has begun traveling to police departments in various states to talk about the issue.

“There’s so much more we can do to take care of ourselves and others,” he told the class.

To break down the stigma around the emotional toll of police work, Willis shares stories from his own 30-year law enforcement career.

He speaks about officers caught up in addiction and depression. Some anecdotes are startling: like the three officers he knew who all placed guns in their mouths in a single month.

For Pomona police officers the training was timely. Last year, Officer Shaun Diamond was shot and killed while serving a search warrant.

The loss is still on the minds of the department’s officers, Sgt. Robert Devee said.

John Violanti, a research professor at the State University of New York at Buffalo, said it’s a common issue in law enforcement.

Violanti, who has studied police and mental health for nearly 30 years, found in a recent study that law enforcement personnel had a 69% greater risk of suicide than the general working population.

“The police culture … it’s hard to crack,” Violanti said. “This is an occupation where folks believe that they solve problems; they don’t have them.”

For Willis, the case of the Compton body was a turning point. Consumed by the investigation, he began to feel emotionless. His wake-up call came during his stepdaughter’s 8th birthday party when he just felt detached.

That was the day he realized he needed to take better care of himself.

He didn’t solve the case until three years later. Ultimately, two men were convicted of first-degree murder in the killing of James Desmond, a former U.S. Postal Service worker, according to the San Diego County district attorney’s office. Both were sentenced to 25 years to life in prison.

More cases came after that, but Willis said he found ways to stay healthy. When he speaks to people in his former field, he recommends exercise and turning to police chaplains and support groups.

His key advice however, is to remember to “serve with compassion.”

Shortly before retirement, a patrol officer under Willis’ watch went to a home where a woman was having trouble breathing. The officer discovered a host of problems: no working heat, mold, no food, and no trash pickup.

Over the course of a year, Willis, who was a patrol captain, and a group of others helped solve those problems for the woman and her husband.

Eventually, the elderly couple died, but Willis said their story sticks with him.

“There’s nothing that’s going to be more healing to you inside than having a positive influence on somebody else,” he said.

Before a cop starts getting that bad , and he knows he can't handle . Why don't they walk away ...come on retiring early doesn't compare to mental disturbances.

This article only scratches the surface - the emotional drain of working in environments like law enforcement, correctional systems, mental health - areas that the general public does not see and does not care to - are closed worlds that take such a toll on those who choose to serve.

Great story Nicole..........it's good to see you are still publishing the great work and challenges of Homicide detectives. Detectives never give up when solving a case, typically they just run out of the necessary resources needed to close it.

Sorry to hear he declares one. Perhaps he can overcome his prejudice soon.