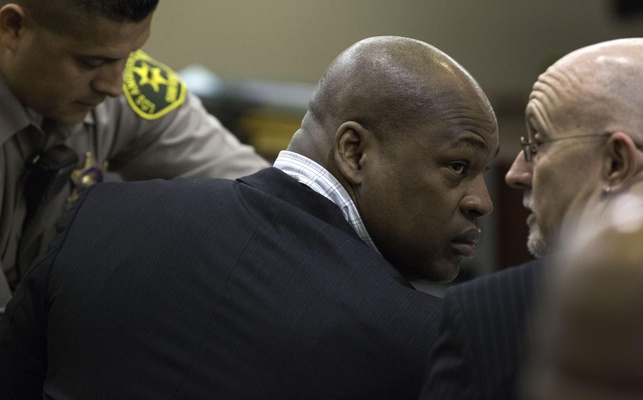 A jury on Nov. 5 found a former NFL player guilty in a 1999 double killing and a 2001 slaying, according to the Los Angeles County district attorney’s office.

A jury deliberated for about eight days before finding Anthony Wayne Smith, a 48-year-old black man, guilty of three counts of first-degree murder for killing Ricky and Kevin Nettles in 1999 and Dennis Henderson in 2001. Several special allegations were also found true, including torture, kidnapping and multiple murders.

The jury was unable to reach a verdict on a fourth murder charge in the 2008 death of Maurilio Ponce, 31. A mistrial was declared and a decision on whether to retry will be made later.

Smith, who played for the Los Angeles and Oakland Raiders, posed as a police officer on Nov. 10, 1999, and kidnapped Ricky and Kevin Nettles from their car wash business in Los Angeles. The two brothers were tortured and killed. They were found the next day, according to court testimony.

On June 24, 2001, Smith kidnapped Dennis Henderson in Mar Vista. He later beat and stabbed Henderson to death, according to evidence presented at the four-week trial.

Sentencing is scheduled for Dec. 21; Smith faces a maximum of three life terms without the possibility of parole.

Smith was a top draft pick for the Raiders in 1990. He signed a four-year, $7.6-million contract extension after his third season. In 1997, he opted out of his contract and did not sign with another team.

At the time, Smith was described as charitable, treating youngsters to trips and volunteering his time to mentor children in a city housing authority youth program.

But he grew increasingly suspicious of people around him.

"I have grown to despise it," Smith told The Times in 1994. "Someone's desire to trick me or cheat me out of what I have, that makes me sick."

Smith had faced other legal troubles. In 2003, he was charged with firebombing a furniture store in Santa Monica, reportedly over a dispute with the store's owner about money and a consignment item. A judge later dismissed the case after two juries deadlocked.

God, forgive the people that done a lot of damage. If he prays and prays God will never leave his sight. NFL Foot Ball Players, get brain damage for getting hit in the head a lot of times. Or people die from that sometimes people lose they're mind and go crazy. Hopefully he knows who God is. God bless him amd may take good care of him.

I wonder how much of his actions had to do with the accumulation of brain damage/concussions he sustained during his football career. We keep hearing more and more of these unfortunate stories as former College/Pro players get into their later years.