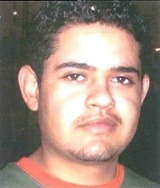 Francisco Javier Ayala-Mejia, a 25-year-old Latino, was fatally shot Saturday, Aug. 17, in the 4600 block of Berryman in Del Rey, according to the L.A. County coroner’s office.

Ayala-Mejia, of Culver City, was shot about 12:30 a.m. as he was pulling away from the curb in his white Honda Civic, according to an LAPD news release.

Officers found Ayala-Mejia inside the car, according to the release.

Ayala-Mejia was pronounced dead at the scene by the L.A. Fire Department at 12:45 a.m., said Ed Winter, a spokesman for the coroner’s office.

It is unknown whether the gunman was on foot or in another vehicle, according to the news release.

Share a memory or thought about Francisco Javier Ayala-Mejia

To family and friends, you have my deepest sympathy. There will come a time when the wicked will be done away with. That's what Jehovah God said at (Psalms 37: 9,10). You will have a chance to see your loved one again, because He said at (Revelations 21:4) "There will be no more dying or sickness, the former things has passed away." That gives us a wonderful hope for the future.