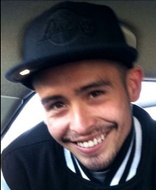 Frederick Andreas Castro, a 23-year-old Latino, was shot and killed Saturday, April 2, in the 1300 block of 59th Street, in the Florence-Firestone area of South Los Angeles, according to Los Angeles County coroner records.

Castro and a friend had been standing near their cars in their neighborhood, when a white car pulled up beside them, Coleman said.

Someone inside the car fired two rounds, striking Castro once. The white car sped away, heading west on 59th Street, then turning right onto Hooper Avenue.

Friends immediately drove Castro to the hospital, Coleman said, but he was pronounced dead at 5:38 p.m., according to coroner’s records.

Castro was a member of a gang, and investigators believe the shooting was gang-related, Coleman said. Witnesses reported seeing two Latinos in the white, four-door car that was last seen heading north on Hooper Avenue.

12:30 p.m., May 3: This article says investigators believed Frederick Castro was a gang member. Investigators no longer believe that.

Do you have information to share about the life of Frederick Andreas Castro ? The Homicide Report needs your help. Please fill out this form or e-mail us at homicidereport@latimes.com.

Share a memory or thought about Frederick Andreas Castro

When will he get justice??? Can this be relates to the vera shooting aswell?? Happened in the same year white car

its been clear he wasn't a gang member, please don't judge people by how they look like or color. just by looking at the homicide report does not mean all victims are gang related. he was a good person and even his job mentioned it. your just the same as all these typical news stereotyping people by how they look or even talk too.

Family members always say their loved ones were never in a gang. However, as frequently happens here on this report, eventually someone will tell the truth and say that indeed he was a gang member. I've seen it one too many times. Just saying.

Fred was not associated with a gang. Though I'm sure the Los Angeles times likes to pigeonhole all Latinos into common stereotypes, Fred was not at all associated with or affiliated with any groups or gangs, I deeply resent that this tragedy was misconstrued into a highly offensive wrongfully reported story, clearly attempting to justify his death with claiming that he was a gang member. No, LA TIMES, not all Latinos that are victims of gang violence are gang members. The only people he cared about and cared for was his family, his wife, and three small children that he deeply loved.

I would really appreciate it if you removed that he was a gang member.... He never was from a gang he was to busy looking for work to provide for his kids

My husband Frederick Andres Castro was never a gang member he was a family man. He leaves behind 3 beautiful children all ages under 5.