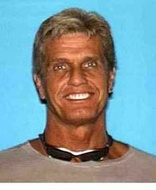 Gavin Smith, a 57-year-old white man, was killed by blunt force to his face and skull on May 2, 2012, according to Los Angeles County investigators.

Smith, a former UCLA basketball player and 20th Century Fox executive, went missing May 1, 2012. Hikers found his remains on Oct. 26, 2014, in a shallow grave about three-quarters of a mile south of Mount Emma Road and 47th Street East in Palmdale. The Los Angeles County coroner’s office formally pronounced Smith dead on that date.

John Lenzie Creech, 32, of Chatsworth, was indicted by a grand jury on capital murder charges with the special circumstance of lying in wait. Creech was the estranged husband of Chandrika Cade, who had been involved in an affair with Smith.

Transcripts of the April 22 grand jury testimony were made public May 11.

Cade testified that she met Smith about 11 p.m. on May 1, 2012, at the top of Fallbrook Avenue near her Chatsworth-area home.

Smith and Cade had met in 2008 at a rehabilitation facility, according to the transcripts. The pair were separated from their respective spouses the night Smith was killed, although Cade was still living with Creech, who was seeing another woman at the time, prosecutors said.

Cade testified that she and Smith had been talking in his Mercedes Benz for about an hour when her husband sneaked up on the couple and began hitting Smith.

As Creech pummeled Smith, Cade testified that she screamed for help and ran back to her home after her husband stopped long enough to tell her, “You’re next.”

Cade said she armed herself with a knife to protect herself against her husband, but when he came home he said he wasn't going to hurt her, according to the transcripts. Instead, she said he asked for a ride back up the hill so he could drive Smith to the hospital in Smith's car.

Bodybuilder Stan McQuay, who knew Creech from their gym, testified that Creech called him before dawn the morning of May 2 and asked him to store Smith’s Mercedes Benz in his Porter Ranch garage.

McQuay said he noticed an object wrapped in a white sheet in the front passenger seat, and that Creech was covered in blood.

When McQuay asked what was going on, Creech told him he’d gotten in a fight with a man who had been seeing his wife, and that he would return in a few hours “to get the car and the body,” according to the transcripts.

Cade also testified that Creech was covered in blood when he came home later that morning. She said her husband told her Smith was dead, and they burned their clothes in the home’s fireplace.

Cade’s aunt, Reina Lim, testified that she rented a storage locker that was used to hide Smith’s car. Acting on a tip, investigators found Smith’s Mercedes in a Simi Valley storage locker in February 2013

Creech, a convicted drug dealer, is serving an eight-year sentence for the sale or transportation of drugs. The district attorney filed a criminal murder charge against Creech in January, but the grand jury capital murder charge supersedes the earlier charge, which was dismissed.

Creech pleaded not guilty to the murder charge in February. His attorney, Alex Kessel,  told reporters then that his client was attacked by Smith on a residential street in Chatsworth and suggested that Smith suffered a fatal injury in the ensuing fight.

Note: Law enforcement has placed Smith's autopsy on a so-called security hold. The Times will update this entry once the hold is lifted.

Do you have information to share about the life of Gavin Smith ? The Homicide Report needs your help. Please fill out this form or e-mail us at homicidereport@latimes.com.

Any more info on this story yet?.